Romance cards (also called sexcards) within The Witcher are a trophy of sorts which can be collected over the course of the game. Whenever Γκέραλτ sleeps with a female character (or NPC) in the game, you collect a romance card.

These cards are reminiscent of early 20th century novelty "naughty" postcards. Each card is initially presented during a "romantic cut scene". These cut scenes all open showing a hazy red closeup of Γκέραλτ leaning in suggestively to make love to an NPC. The romance card image is then overlaid. Originally, the North American edition of the game had the more prudish versions of the cards, i.e. with covered or lacking nipples and buttocks, but with the release of the Director's Cut patch uncensored cards are now available in North America without the use of modifications. 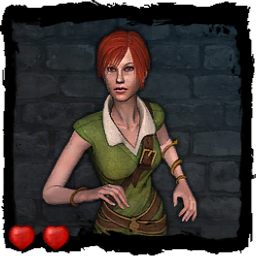 Once a card has been acquired, it becomes accessible via the journal as a little heart icon superimposed on the character image frame for each time there has been an encounter. Character entries with a more general moniker, like People of the Outskirts, can only be gained by this way.

Depending on which love interest, Shani or Triss, Γκέραλτ decides to go with, you will have two little heart icons on that character journal entry image.

As Γκέραλτ wanders through Vizima and the area, you will overhear the townsfolk saying such gems as: "A witcher! Hide your women!", an insight into how the locals view witchers' sexual appetites (although it may be simple prejudice).

Romance cards scale with your selected screen or window resolution. While no detail is added during up-scaling, detail is lost during down-scaling. The romance cards on this site are roughly the size of those in a game running 1680x1050 resolution.

In the game, certain romance cards can be obtained only by forfeiting the chance to get another. One such example is the second romance card given by either of the witcher's two love interests Triss and / or Shani, where you will be presented with a choice to ether focus your trust to one or the other. As a result, you'll need multiple plays through in order to collect all the romance cards.