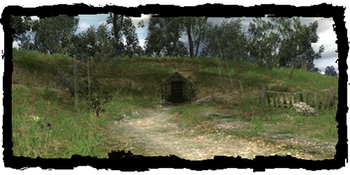 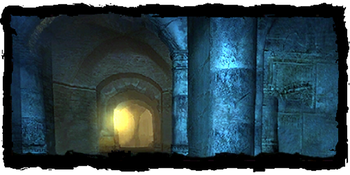 The crypt in the Προάστια is located to the north-east of the village area, at the end of a path. Inside, it boasts a Κύκλος των Στοιχείων, the Circle of Inner Fire (likely Γκέραλτ's first chance to learn Ιγκνι) and a Μέρος της Δύναμης.

Initially, the crypt seems to have only two chambers and a rotunda, but later in Chapter I, after Mikul's fellow guards have picked through the additional walls to get at the much anticipated riches inside, four more chambers open up. The farthest of these contains a rather nasty alghoul, Ozzrel and some pretty nice goodies.

There is an old crypt in the Outskirts, and it has not been used for a long time. People are afraid to enter it because of the monsters that dwell there.

Rumor has it that treasure is hidden inside the crypt. The truth is that people of old were buried there with valuable items; sometimes the graves of the wealthy were separated from the remainder of the crypt by an additional wall for fear of robbery.