Attacking is one of the main things Γκέραλτ does in the game. Whether he is defending the honour of a damsel in distress, or just defending himself from monsters, it is a good thing his swords are on his back at all times. He is usually called upon with no notice to draw steel, or silver, on his daily Path. 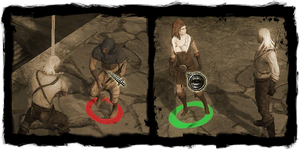 First, draw your sword, unless it is a fistfight. If you have a choice and are dealing with humans or non-monstrous, natural beings (e.g. wolfs and dogs), use your steel sword. Otherwise, use your silver sword. Both are deadly.

A succesfull single-click attack actually looks like a sequence of multiple maneuvers, performed automatically by Γκέραλτ. If clicked in the midst of action, Γκέραλτ ceases to do anything and brief time penalty is applied before he could restart attacking. Thus, the worst course of actions in the swordfight is impatient rapid clicking on enemy. Mentioned sequence is not to be confused with Chained attacks, which basically is a succession of such sequences and is described later in the article.

If attack fails due to opponent's agility Γκέραλτ halts, backing his sword, and the word "Dodge" or "Parry", correspondingly, briefly pops up above the enemy. Immediate resumption of single attack-clicking is advised in this case to prevent the enemy from retaliating and keeping one busy dodging/parrying. 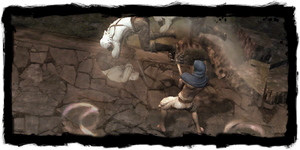 Γκέραλτ's evasive maneuvers are fun to do, even if only to see what he can do. He is quite the acrobat, doing flips and somersaults whenever necessary. In isometric camera modes:

Γκέραλτ can only do evasive maneuvers while a weapon is drawn. 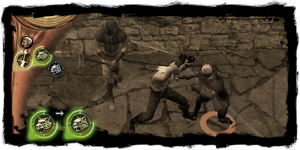 During combat, this is an especially useful option. Use the active pause to switch between combat styles when fighting a group of opponents. As the fight progresses and Γκέραλτ works his witcher magic with the sword, the group of opponents gets whittled down to two sorry fighters, and then finally just one. When he is down to just two opponents, it becomes less and less useful to use the Group Style. It can still be effective, but only if the two bad guys are optimally placed in relation to him. Focusing on more adversary-specific combat styles, like Fast or Strong Style, makes more sense and it is at this point that active pause comes in very handy.

It is also extremely useful to simply pause the game at (almost) any point. Cut scenes are an obvious exception as are some predetermined parts of some conversations with NPCs. 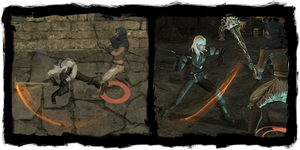 After successful completion of a single attack sequence (see Basics), a player is given an opportunity (described below) to keep on with another added, or, "chained" attack sequence with ever more increasing efficiency (greater damage and added bonuses, depending on Μαχητικά στυλ του Witcher). The chain of sequences is limited to a certain number, determined solely by development of talents devoted to fighting styles. The last sequence allowed is called "Final attack" and is followed by camera shaking to show things're going serious.

Make sure that you maximize your efficiency in combat by using as many skills as you have at your disposal. New and more complex chains of attack may be observed if player chooses to develop fighting styles as Γκέραλτ goes up in levels.

The Game gives certain hints, when chaining is due:

Tip: Chaining attacks requires precise timing. Clicking too soon will disrupt an attack, and clicking too late will restart the attack sequence. Drinking Blizzard potions requires an adjustment of timing; watching for the trails and listening for the whistling can help.

Tip: Player does not have to chain the sequence against a single opponent - once chaining becomes possible, the player may click on another foe in the immediate vicinity to keep on chaining attacks. This way, if the original adversary dies before the final attack is achieved, it is possible to redirect accumulated destructive power upon another foe. 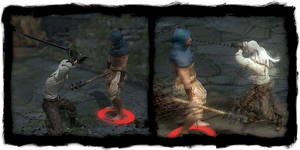 You have just stunned your opponent.

A coup de grâce is a great way of finishing off an opponent and getting a show all at the same time. As Γκέραλτ acquires more talents, he also acquires more finishing moves. These can be quite entertaining to watch.

Tip: Attacks can cause critical effects like Stun, Bleeding and Pain.