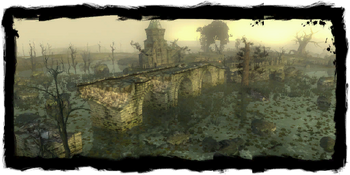 The swamp cemetery is where much of the action in Chapter V takes place. This is where Γκέραλτ must look for the components necessary to remake Raven's armour.

When the royal court was at the Old Manor, the marshes around this structure were regularly dried and cleared of monsters. An old Vizima cemetery dating back to elven times occupies a good portion of the area. Currently, Βίζιμα's main necropolis lies within its walls, and the swamp Vizima cemetery has turned into a dangerous, haunted place. Entrances to numerous crypts have been flooded by muddy water, and numerous unpleasant creatures lurk among the stinking vapors. Nevertheless, refugees from Old Βίζιμα have found shelter in the small caves which litter the marshes.

On a hill, among the remains of ancient gravestones, stands a decrepit chapel. Funeral rites were performed there once. Beneath it is a vast crypt where members of the royal family were buried.