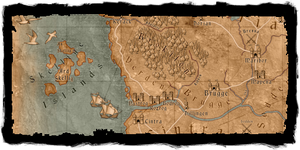 Skellige, or the Νησιά Skellige, is an archipelago and one of the Βόρεια Βασίλεια. The group of six islands is situated in the North Sea, off the coast of Cintra, and southwest of Cidaris and Verden.

The coat of arms for the Skellige islands is never actually described in the books. This particular coat of arms was designed by our resident heraldry and Witcher expert Mboro. For a different take on the coat of arms, we have the Czech concept.

The flag for the Skellige islands is never actually described in the books. This particular flag was designed by our resident heraldry and Witcher expert Mboro.

Skellige has been confirmed as one of the major locations in the upcoming The Witcher 3 [1].

In the book Ο Πύργος του Χελιδονιού (English: The Tower of the Swallow), the residents and the belief of Skellige largely resembles the real-world "Βίκινγκ" and Σκανδιναβική μυθολογία .