Witcher Wiki
Register
Don't have an account?
Sign In
in: Τοποθεσίες στο The Witcher, The Witcher Κεφάλαιο V, Βίζιμα
Ελληνικά 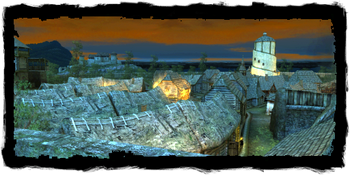 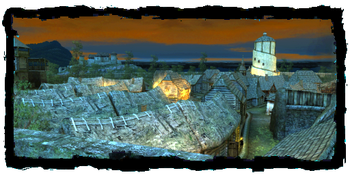 After his stay in the rather idyllic village of Θολά Νερά, Γκέραλτ is forced to return to Βίζιμα where there is now open fighting in the streets. As he and Νταντέλιον approach the city by boat, they can see that it is now ablaze. After a brief stop on the dike to get his bearings and the latest news, the witcher heads towards Old Vizima.

Surrounded by a low palisade, Old Vizima conjures the spirit of yesteryear, when even the capitals of powerful nations looked like the makeshift collection of thatched wooden huts, and their streets were filled with hens and dirty children. Relocating his seat from the Old manor to the Royal castle, King Foltest began the long process of converting Vizima from a wooden village into a brick town.

The war was merciless to Old Vizima's inhabitants. At its end, the area became something of a ghetto for non-humans — assimilated elves and dwarves were forced to settle where even the poor did not want to live. Currently Old Vizima is an area of skirmishes between knights of the Order of the Flaming Rose and the Scoia'tael.