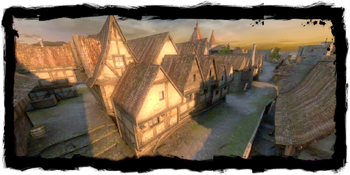 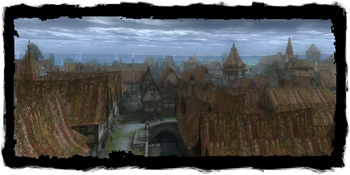 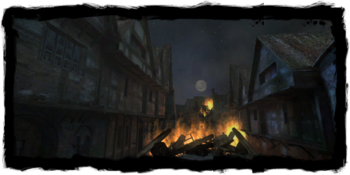 The uprising of the non-humans has changed the Temple Quarter of Βίζιμα beyond recognition. Fires rage everywhere and some streets are blocked by makeshift barricades. In many places the Scoia'tael clash with the Temerian army and knights of the Order. Many of the inhabitants have fled to the swamps, others hide in cellars and houses, praying for a quick end to the rioting. All kinds of missionaries and evangelists are taking advantage of the situation, preaching about divine wrath and the imminent end of the world.

"The Temple Quarter of Vizima is strangely reminiscent of a quarrelsome, dirty prostitute, who — despite her disagreeable appearance and personality — remains somehow alluring. This may be because of the uncomplicated, illicit entertainment it offers — always a temptation. Beggars, shady characters, scowling poor folk, frustrated nonhumans and, of course, "ladies" occupy every corner. Recently, Vizima's Temple Quarter was cut off from the rest of the world by the threat of an epidemic. The few City Guard patrols that come here try not to venture too far into the quarter's dark alleys, where brutal deeds take place each night. At the centre of Vizima's Temple Quarter stands Νοσοκομείο της Αγ. Λεμπιόντα (previously a temple of Melitele), the only place of solace for the poor and plague victims. Alongside the hospital stand the headquarters of the Order of the Flaming Rose, which tries to combat local crime and the monsters creeping in from the sewers and the cemetery."

The Temple Quarter in "Παρενέργειες" is not quite the same as one might remember it from the main campaign. For one thing, the story in the module is set some time before the events in the game. For a complete list of Temple Quarter locations see the Locations in Παρενέργειες.