On the eve of market day, Γκέραλτ rides into Μπλαβίκεν with a kikimore-carcass in tow. He seeks out Caldemeyn, the town's alderman, to try and get a reward for the dead critter. He's out of luck, though, and Caldemeyn suggests throwing the carcass in the local cesspool. However, one of the alderman's staff, Carrypebble, mentions that the local wizard, Master Irion, might fancy a look at the creature. All agree it's worth a try and head to Irion's tower to find the mage.

Master Irion is far more interested in Γκέραλτ than in some kikimore carcass, however. When Γκέραλτ steps inside the tower, he steps straight into an illusion. Finding the wizard surrounded by a veritable garden of Eden (complete with a naked, young woman casually picking apples), Γκέραλτ recognizes the man as Stregobor, a mage whom he'd last seen in King Idi's court in Kovir, and not "Master Irion" at all. The wizard explains that since he is occupying Irion's tower, that it seemed a fitting tribute to call himself by that name. It also did not hurt to conceal his true identity.

After a few pleasantries, Stregobor finally gets to the point. He pleads for Γκέραλτ's help claiming that a "monster" is pursuing him, seeking to kill him. After a little bit of prodding, the wizard confesses to Γκέραλτ that the monster is in fact a young woman, whom he says was born under the Curse of the Black Sun. Γκέραλτ scoffs at the idea, calling it absurd. Stregobor begs the witcher to help him, to kill the girl saying that she is far more of a monster than the kikimore the witcher recently slew. He insists that it would be "the lesser evil" to kill her. Γκέραλτ refuses, and leaves.

Meanwhile, Renfri has entered Μπλαβίκεν along with her band of miscreants. Γκέραλτ meets them all in the tavern and is about to be drawn into a fight when Renfri herself steps in. She asks Γκέραλτ to hear her out, and while they are at it, to let the alderman know of her plans. She proceeds to explain that she bears a letter from King Audoen which essentially makes her and her band untouchable. Caldemeyn confirms this.

That night, when Γκέραλτ withdraws to his attic room at Caldemeyn's home, he finds Renfri has beaten him there. They talk, the young woman proceeds to tell the witcher her life story. She also compares Stregobor to the kikimore that Γκέραλτ brought into town, saying he is a worse monster and offers Γκέραλτ the same deal Stregobor did: choose the lesser evil, kill the other, receive any reward within reason.

Γκέραλτ refuses, again. He pleads with Renfri to forgive Stregobor, to prove the wizard and the alleged Curse were wrong. She refuses but before she leaves, she gives the impression that she and her band will leave town peacefully, possibly to meet Stregobor somewhere else for a final showdown. Then, she and Γκέραλτ make love.

In the morning, during breakfast with Caldemeyn and his family, the alderman casually mentions Tridam, which immediately piques the witcher's interest as Renfri had specifically mentioned a certain "Tridam ultimatum" the night before. When Caldemeyn relates the full story, Γκέραλτ suddenly realizes what Renfri's real plan is, and that she is not in fact preparing to leave town at all. She plans to use the fact that the local mage in any given town is duty bound to do what he can to protect the town, so she plans to massacre the townsfolk in the marketplace to draw the wizard out.

Γκέραλτ races immediately to the marketplace and finds Renfri's band sizing it up. He chooses to engage them in battle rather than wait for them to fulfill their plan and start killing the townsfolk. Renfri is not with them as she is trying to lure Stregobor from his tower, but she has left a message for the witcher, one final plea to side with her. Civril decides to finish off the witcher with a swift crossbow bolt but is surprised to learn that the witcher can deflect these in flight with his blade. He then orders the band to close ranks and charge the witcher as one. Their plan is quickly and decisively thwarted by our hero and Renfri only returns in time to see the last of her men fall. She reveals that Stegobor ignored her ultimatum, telling her to do as she will to the townsfolk. She then confronts Γκέραλτ and they cross blades.

When it's all over, Stregobor approaches the witcher, intent on performing an autopsy on the girl's body, to prove his theory that the Curse was the cause. But, suprising even himself, Γκέραλτ refuses to let him touch her body. Stregobor leaves telling the witcher that he's free to follow, just as the towsfolk begin hurling rocks at the witcher. Γκέραλτ protects himself with the quen sign until Caldemeyn orders them to stop. That is however the last favour the alderman plans to extend Γκέραλτ and he tells the witcher to leave Μπλαβίκεν and never come back.

Like all the short stories in The Last Wish, The Lesser Evil touches several classic fairy tales, shedding an alternative light on many of them, most notably: Snow White and the Seven Dwarves, Sleeping Beauty & Rapunzel. 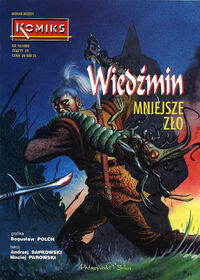 The short story has been adapted as part of episodes 10 and 11 of The Hexer TV series, entitled "Mniejsze zło" (The Lesser Evil) and "Jaskier" (Dandelion).

Renfri's role was expanded in the series compared to the short story, and she appears in two other episodes before the ones adapted from this story - "Człowiek - pierwsze spotkanie" (Human - First Meeting), where she is rescued by Γκέραλτ, and "Świątynia Melitele" (The Temple of Melitele), where she is hired by count Falwick to kill Nenneke and other priestesses of Melitele.

While The Witcher computer game is not based directly any of the short stories nor novels, it features some refefrences to this story:

The game's premium module "The Price of Neutrality", while not a direct adaptation, features many similarities with this story: