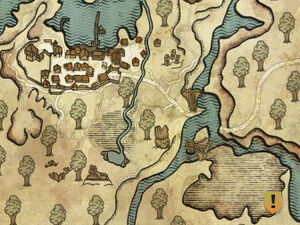 The Bandit hideout is a house on the far edge of the swamp across the river and southeast of Flotsam. Dmitri and his henchmen make it their base. The approach to the building has quite a few snares, so beware!

There are a few items stashed there, most notably a superb cutlass and a Ηλιακό ρούνο.

Note that you need the bandit hideout key to access the house, which is obtained during the Troll Trouble quest.

The swamp surrounding the bandit hideout is normally surrounded by four bandits. The hideout itself is guarded by several more bandits who won't leave its immediate area. The bandits in the swamp will respawn every day. At night, however, there are also drowners and drowned dead in the swamp. Under certain circumstances at night, a randomly named bruxa will appear under the hanged elf woman at the western edge of the swamp.