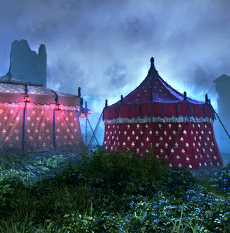 The Camp followers' encampment is located just outside the Kaedweni camp, it houses the Kaedweni brothel as well as some traders and (with patch 1.3 installed) a Αποθήκευση chest. Across the stream to the west is Roche's encampment and, beyond that, the coastal region and the site of Sabrina Glevissig's execution.

The inevitable hodge-podge of camp followers had settled in just beyond the palisade of Henselt's military camp. The area was home to all manner of rabble, such as craftsmen, prostitutes, traders, thieves and vagabonds - in other words, all those needed to keep an army on its feet. Vernon Roche was directed to settle with his soldiers among the camp followers. This instruction from the Kaedwenis was meant as a jab at the Temerians, but the Blue Stripes honestly preferred the company of scoundrels to that of warriors bearing the unicorn on their chests.