Defending Kaer Morhen is the very first quest of the game and it spans the entirety of the Prologue. It is the game tutorial. In this quest, our hero learns (or re-learns) to use a Σπαθί, fight bad guys both big and small, not to mention groups of them, cast signs, brew potions and skin monsters. He learns the basics of what he can do and gets a taste for what he could do. All this as he and his fellow witchers try to fend off an attack on the keep by the nefarious Salamandra organization.

After being found, unconscious in the woods outside Kaer Morhen, Γκέραλτ is taken back to the fortress and nursed back to health. The witcher is just beginning to get his bearings when the fortress is attacked by a bloodthirsty gang led by at least one mage and a notorious outlaw known only as the "Professor". We learn that this wanted criminal has promised 50

for every witcher killed, so his hired crew is quite keen on getting a bit of extra cash.

Lambert is the first to notice that something is wrong. He cautiously makes his way to the main gate of the keep where he is met by the first wave of the attack. He fends off several of the would-be invaders, but realizing that there are quite a few more, he retreats to warn the other witchers of the coming attack, but the gang is hot on his heals.

Realizing immediate danger, Vesemir assesses the situation and takes charge. It is all hands to the deck! He presses Γκέραλτ into service, telling him to simply grab a sword from one of the training forms and help fend off the assault. The witchers, with the help of Triss, manage to hold off the onslaught long enough to reach the gate to the upper courtyard, but they need to make it to the inner courtyard and that gate is currently closed.

Vesemir orders Γκέραλτ to get to the winch and open the gate by using the back way through the tower. Our hero is initially hesitant, but gets on with the task. He is immediately set upon by numerous other bandits as he races toward his destination. Reaching the tower, he stops short just in time to avoid falling into the gaping pit which has replaced a large portion for the former battlement. The stairs still seem more or less intact and having no real alternative, he runs up.

Apparently the stairs were less solid than they initially appeared, and the structure begins to give way beneath the witcher's feet. His instincts kick in and he makes a heroic leap, barely reaching the landing. His pursuers are not so lucky and several fall to their death. Those who do not are left to curse Γκέραλτ from below as he continues on his mission to open the gate.

A few more bandits attempt to stop him, but Γκέραλτ finally reaches the winch allowing his beleaguered allies to enter the inner courtyard. Triss then collapses the entrance to keep their attackers out, allowing for a short breather in the fighting. This is the first opportunity that anyone has to discuss what has just happened.

Apparently the Professor has killed at least 17 people and is wanted in several kingdoms. Triss has heard of the mage, Savolla, but does not have very much information other than the fact that he is mad.

On Vesimir's orders, Leo and Γκέραλτ run back to the lab only to see it being ransacked by the Professor and the mage, but since there is a magical barrier in the way, they can do nothing but watch helplessly. They also can not get out of the underground because the mage has rather inconveniently collapse the tunnel leading to the stairs out.

Then Leo suggests that Γκέραλτ clear the side passage so that they can get out of the underground and advise the others of what has happened. Leo explains that he can not clear it himself because he broke his hand training and can not form the Σύμβολο του Αρντ. Worse still, Γκέραλτ can not remember the Σύμβολο του Αρντ, so Leo proposes they go to the Κύκλος των Στοιχείων and see if that jogs the witcher's memory. Thankfully, it does, so they return and Γκέραλτ clears the passage to the main keep.

At this point, Γκέραλτ must decide whether he will be helping Triss save the lab, or Vesemir and the other witchers fight the frightener.

Meanwhile the mage has already escaped through a magic portal with the witchers' secrets, leaving the Professor behind to "clean up". Some typical bad guy posturing and then Γκέραλτ sets out to kill the Professor, but so does Leo, and less expertly so. The Professor spies his opportunity and fells Leo with a single shot from his crossbow. He then makes his own exit through that magic portal (which collapses hereafter), leaving Γκέραλτ to tend to the dying young man.

As nothing can be done for Leo, Vesemir sends Γκέραλτ to help Lambert make a potion to help Triss. Once Triss is well, she and the witchers bid farewell to Leo with a funeral pyre and set off in different directions to try to track down Leo's murderers and bring them to justice and hopefully recover the stolen witchers' secrets in the process.

I disposed of the bandits guarding the gate. Now I need to open it. I must open the gate. 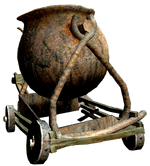 Moving Inside Kaer Morhen or The Courtyard[]

Talking to Triss + Revenge or Revenge[] 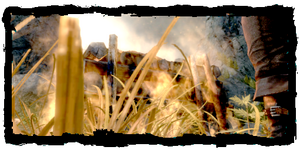