A druids' circle is usually a clearing in a grove where druids live or gather. The term is also used to refer to the group of druids themselves. 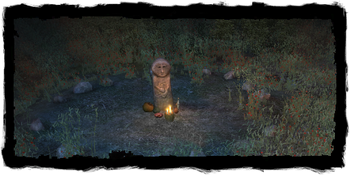 The Druids' circle is located in the Fields outside Θολά Νερά, east-north-east of the Hermit's hut. It is where Γκέραλτ must defeat nine of the wraiths who haunt it for the Hermit. These wraiths are part of the King of the Wild Hunt's entourage.

At night, the candle at the base of the alter is lit. Γκέραλτ can blow it out with Aard and relight it with Igni. (This likely does not work during the Hunting the Wild Hunt quest.)