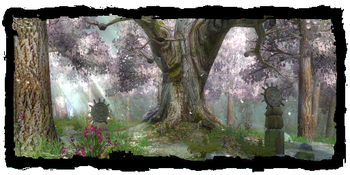 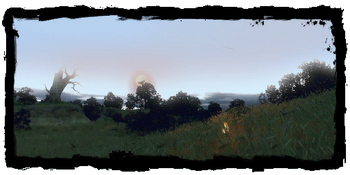 The Druids' Grove, is located in the Swamp, north of the Lumberjacks' glade and west of the Golem burial ground and the Mage's tower. It is home to a colony of druids, who appear to be led by an Elder druid, at least initially. Later this role seems to have been taken over by the Hierophant. There is also a dryad, Morenn, staying there at the moment and Yaevinn often stops by to clear his head.

The druids are caring individuals and have no wish to see anyone or anything suffer. A nice side benefit of this philosophy is that anyone in the grove receives free healing.

Like in many groves of the druids, a huge oak shadows this place; the druids meditate and pray under its branches.

"The swamp is a place where man must bow before Nature in all its wild, tangled grandeur. That is why the druids have settled there, establishing a sacred grove with the tree of life at its centre. The disciples of Nature allow no violence within the grove, where they tend to sick animals, even taking in wounded dryads."