Witcher Wiki
Register
Don't have an account?
Sign In
in: Τοποθεσίες στο The Witcher 2, The Witcher 2 Πρόλογος
Ελληνικά 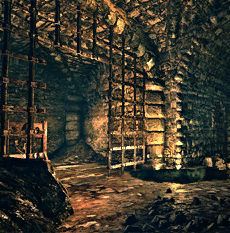 Γκέραλτ της Ρίβια has also been held and handcuffed in one cell of the dungeons. At the beginning of The Witcher 2: Assassins of Kings, the reason for his captivity is unknown until Vernon Roche enters the cell to question him.