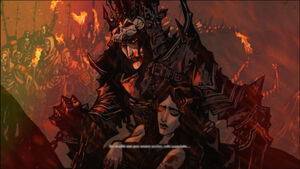 The King of the Wild Hunt in The Witcher 2

Eredin Bréacc Glas, also known to the unicorns as "Sparrowhawk", is an Aen Elle and leader of an elven cavalry known as the Dearg Ruadhri, which means "Red Riders" or "Red Horsemen".

In the fifth tome of The Witcher Saga, The Lady of the Lake, Ciri first meets Eredin on her way to Tir ná Lia in the world of the Aen Elle. There he brings her to the king, Auberon Muircetach where she is told that, because of her direct link to Lara Dorren, she will only be allowed to leave once she has given birth to an heir to the throne.

Knowing that he had made an impression on her and that she was likely infatuated with him, Eredin usec that to his advantage to push his and Avallac'h's plans, then unknown to the king, further. Eredin and Avallac'h, an Aen Saevherne elf were actually the de facto rulers of the Aen Elle given that Auberon was reclusive and uninvolved in the day-to-day life of his people.

Later, he also killed the king, possibly unwittingly, by supplying him with some sort of aphrodisiac or performance enhancer for his encounters with Ciri.

He is said to have once possessed (along with Avallac'h) The Gate of the Worlds, a great power allowing one to control space and time but he lost it, now trying to retrieve it. It is known that he and Avallac'h used that power to gain control of at least one world (that being the Aen Elle world where they killed all humans - something Ciri only realized during her escape when she found a huge pile of human bones. This was later confirmed by the unicorns.

After Ciri's escape from Aen Elle, Eredin and his cavalry chased her through space and time finally catching up with her in a forest on an unknown world. He also haunted Ciri as a wraith while she rested in a French tavern telling her that he would wait for her on The Spiral - a place she eventually entered after her long journey through space and time. That was the last mention of him in the novels.

In the human world, he was known and feared as the King of the Wild Hunt; The group of spectres actually being the cavalry he commands.