Fisstech is a drug similar in appearance and effect to amphetamine or cocaine. It is a powder which is typically snorted or rubbed on the gums, but as with opiates and other narcotics in our society, it can also be used in medicine as an anaesthetic.

The Rats used fisstech. Leo Bonhart also drugged Ciri with it when he forced her to fight in the arena.

"Fisstech is a popular narcotic among affluent youth and members of Temeria's underworld. Powerful crime organizations jealously guard the secrets of its production. Although the laws of the kingdom forbid the drug's sale, fisstech is a source of huge profits for the bosses of the criminal underworld."

The Salamandra control the production and the trading of this drug in Vizima. It is usually consumed through the nose which leads to cold like symptoms, mostly sneezing. Another way of consuming the drug revealed in the game is to rub it under the foreskin: Γκέραλτ describes this to Jethro as the most effective way: "...where you can fold back your skin, Jethro."

There is no printed recipe in the game for fisstech, the sources below are for the substance only. Of course, consuming fisstech will result in a Journal entry, complete with recipe. 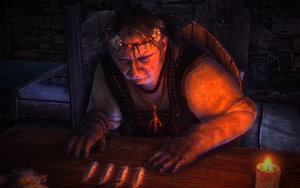 Στο παιχνίδι για υπολογιστή The Witcher 2: Assassins of Kings, during the quest "The Scent of Incense", Γκέραλτ is asked by a shady alchemist, Vencel Pugg, to get the formula for some "special incense" being manufactured in Flotsam by Vilmos Bartok. Later it transpires that the formula is actually for fisstech. Sadly, or maybe not, fisstech cannot be made in the course of the game.