Grand Master of the Order 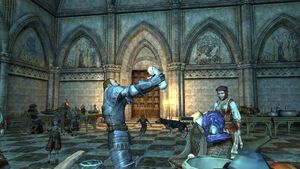 Grand Master is the supreme leader of the Orders of White and Flaming Rose. His authority is almost but not quite the ultimate power; he does have superiors, the heads of the countries where there are bastions of the Order. In Temeria, that is Foltest.

In the game the Grand Master is Jacques de Aldersberg. He does not like King Foltest and plans to overthrow him. If Γκέραλτ takes the Order path, he joins Siegfried της Denesle and the knights loyal to the King and fights the Grand Master. After defeating Aldersberg, Siegfried is made the new Grand Master by Foltest.

The Grand Master is quite possibly Alvin, after he disappears from Θολά Νερά, he travels back through time. When he comes back, this is the man he has become. see Speculation about Alvin