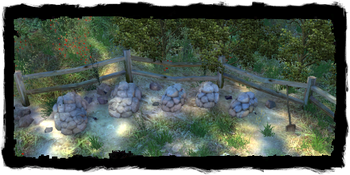 These five kurgans (or barrows), located next to the Hermit's hut south of the Fields, are all that remains of the Lady of the Lake's champions. But what is that? There is an empty one...

Of the four that are not empty, they contain the remains of knights who died serving the Lady over the ages.

The hermit says that late at night, one can speak with the spirits of the Lady's champions.