Lady of the Lake's altar 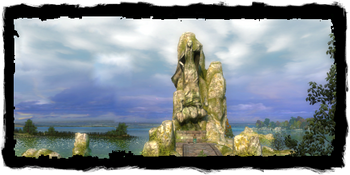 Rising majestically from a stone outcropping on the Παραλίμνιο near Θολά Νερά, stands the altar to the Lady of the Lake. The local vodyans worship here as evidenced by the cleric who tends the altar.

It is from this monument that Γκέραλτ receives the clues necessary to collect the correct offerings for the Lady. Text on the altar reads as follows:

... For the Lady of the Lake is a goddess of elder peoples of such wisdom and might that her single utterance conquered hatred and greed. She spoke but one sentence, one sentence so filled with truth that they had no choice — for no man and no vodyanoi can resist the ultimate truth. And so humans and vodyanoi shoook hands and presented each other with gifts, forging a truce. Wondrous were the gifts indeed! A gold bracelet belonging to the village's founder, richly ornamented by a true master's hand, went to the vodyanoi. And an old vodyanoi looked upon the Lady's face, and said: "Thy word can make this world sink just as it can make it burn until only ashes remain." And as the people saw a fine statue of alabaster appear, they were all speechless. And by the lake, in a wondrous land, a great feast was held. And so on the story goes...