Witcher Wiki
Register
Don't have an account?
Sign In
in: Τέρατα στο The Witcher, Πλάσματα, Κουλτούρα,
and 2 more
Ελληνικά 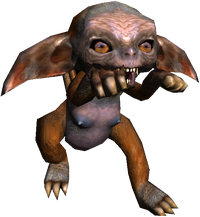 Mamunes are small creatures said to prevent folk from finding their way home after a night out at the inn. They are said to gather on the eve of Saovine. They are mentioned, along with misguids, by the villagers of Upper Posada in the short story "Η Άκρη του Κόσμου".

These little creatures are seen throughout The Witcher, but they serve no obvious purpose. They tend to gravitate to Γκέραλτ and dance around him but otherwise do not interact.