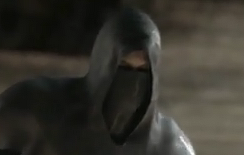 The Mysterious assassin is the first kingslayer; the one who tried unsuccessfully to slay Foltest. He tried during the ending of the original game. Γκέραλτ, who was in the process of receiving his reward for destroying Salamandra and killing Jacques de Aldersberg (or leaving his soul to The King of The Wild Hunt) stopped and killed him. It was this attempt on the king's life which began the quest "The Assassins of Kings", but the cutscene was not a part of the second game. There was no hint or clue as to his true identity, except that he was possibly a witcher. During the final confrontation with Letho, he talked about two other witchers, which may or may not be alive and on the Path. But he never mentioned this assassin in particular.

In the prologue, you can talk about him with Triss (autopsy results) and Temerian Recruit (from where he came). Triss is in your tent, the soldier is near Crinfrid Reavers. Before entering the battle tower, after conversation with Shilard Fitz-Oesterlen, Foltest will ask you about him. Later, in Epilogue, when your memory recovers, you see the King of The Wild Hunt, Γιενέφερ, Γκέραλτ, Letho and three witchers (Serrit, Auckes and maybe this assasin).