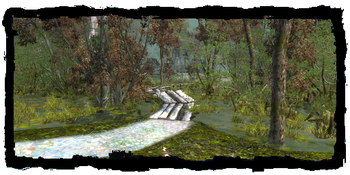 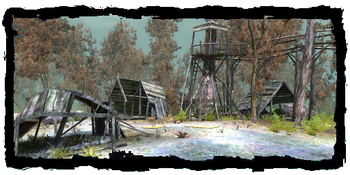 The nonhuman camp is located in the north-eastern corner of the swamp, not far from the Mage's tower. This is where Yaevinn and his band of Scoia'tael stage their battle with the Order of the Flaming Rose in Force Recon.

A haughty Scoia'tael dressed as a huntress in the camp asks Γκέραλτ if he knows about Feainnewedd, a golden opportunity for Γκέραλτ to give her a dressing down for her bigotry... or not. He can also ask her about it, not that she will tell him, but she does give him Lara's Gift. If Γκέραλτ talks to her again, he can choose to give her the flower, and gets a response that seems to be a dropped plot/translation bug. She will mention "burmarigold", which does not exist in the game and does not result in any journal entries.

The same conversation can be repeated after resting or leaving and returning to the swamp, and if Γκέραλτ chooses the same responses (give her another flower), she will then tell you about "Green Mould", which also does not seem to result in journal entries. When gifted with a Feainnewedd a third time, she asks Gerald to "take a look at this fool's parsley". Finally, when she has told him everything she knows about herbs, she'll say: "You know as much as I, dh'oine." This does, however, cost Gerald an extra Feainnewedd.

In Chapter III, the elves have moved on and the camp, now known as the Salamandra encampment, has been taken over by Roland Bleinheim and his band of Salamandra. They are coordinating the fisstech operation with his brother, Gellert, back in the city. They deal with the gathering of beggartick, a primary ingredient and he runs the lab in the sewers.