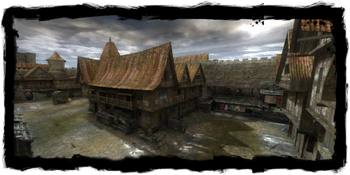 The nonhuman district, or Little Mahakam as it is known, is a separate area which has been designated for elves and dwarves in Βίζιμα's Συνοικία του Ναού. Members of these races live and work there. Only Malcolm Stein, a blacksmith, and Καλκσταιν, the Αλχημιστές, have set up a businesses in that part of the city. Those who venture into the non-human district do so at their own risk, especially at night.

Γκέραλτ will have the opportunity to visit this area in Chapters II, III and the Επίλογος of the game. Things are not quite the same though, for the Επίλογος.

Characters of interest living in the non-human district include: