Philippa Eilhart (Polish, Filippa Eilhart), a sorceress, was King Vizimir's advisor, and remained in Redania's court even after his death, for which she was likely responsible. She is one of the few to possess the ability to polymorph.

She led the Επίθεση στην Thanedd against the Πρώτου Κεφαλαίου, intending to neutralise suspected traitors allied with Nilfgaard.

She was one of the founding members of the Στοά των Μαγισσών, and is considered to be the leader of it.

Even though Γκέραλτ never meets this sorceress face to face, her name appears in the conversations then and again. 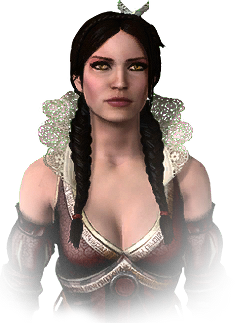 Philippa Eilhart is a main character in The Witcher 2: Assassins of Kings.

This was hardly the first time Γκέραλτ and I encountered Philippa Eilhart – jewel of the court at Tretogor and once the trusted sorceress of King Vizimir II. Philippa was one of the most talented mages of those times – only a handful ever mastered the art of polymorphy. Her intellect and the influence she held at the Redanian court were not to be underestimated. Proud, independent and extremely beautiful, as graceful in a fanciful yet elegant dress as in a man's travelling outfit, she was beyond any doubt one of the most attractive women I have ever known. Yet I would not count Philippa among the most pleasant of females, despite her indisputable though chilly charm. Her gaze alone was enough to make the most confident men shudder, and the mere thought of spending a night with her would make their flesh creep.

At the time Philippa Eilhart was staying in the town of Vergen as part of Saskia the Dragonslayer's inner circle. Her motives remained unclear, to say the least – the former court magician had never been known for her altruism.

However, one cannot deny that without her help Γκέραλτ would not have found his way through the magical mist. Philippa rendered him an invaluable service at that time.

Her qualifications in the area of curses, magic and supernatural phenomena were undeniable. If there was anyone to help the witcher in this regard back then, it was certainly Miss Eilhart. Still, I was extremely glad that it was Γκέραλτ, and not I, who was forced to speak with the Tretogor magician.

It was Philippa who gave the witcher the list of the ingredients for the antidote for the poison plaguing Saskia. The knowledge of recipes, ingredients and their specific properties is always extremely helpful in learning magical arcana, and few could equal Eilhart in that regard.

Philippa tricked everyone, not only casting a charm on Saskia under the guise of aid, but also using Γκέραλτ and Iorveth in her machinations. On the one hand it was inevitable. On the other, it left a bitter aftertaste, giving rise to the thought that sorceresses' misdeeds are responsible for the widespread mistrust towards their profession and perhaps even towards the female gender. Eilhart abducted Saskia and left for Loc Muinne. Back then we did not know what she was planning.

If the Kaedweni win the siege of Vergen:

Fleeing the victorious Henselt, Philippa Eilhart moved with Síle and Saskia to Loc Muinne, where a summit of sorcerers and crowned heads was to take place.

If Philippa Eilhart had counted on her troubles coming to end in Loc Muinne, she miscalculated. She was arrested by the Redanians just after arriving, and placed in a dungeon where she awaited the king's judgment.

In retribution for certain events of the past, not to mention her recent activities, the sorceress was brutally blinded during an initial interrogation. Death seemed an increasingly likely prospect, and it seemed only a miracle could save her.

If Γκέραλτ chooses to help Philippa instead of saving Triss:

Γκέραλτ had no desire to help a magician who repaid his trust with treason, but Philippa's arguments were justified. Only she could lift the spell from Saskia, thus the witcher was forced to trust her words once more.

One might have thought that a blind, exhausted sorceress would have no hope of flee. Yet she seized a moment in which both her guardians were distracted and deceived them. Philippa Eilhart risked it all on one gambit and transformed into an owl, fleeing Loc Muinne. Given the presence of the vengeful Iorveth, one might say that fear gave wing to her escape plan.