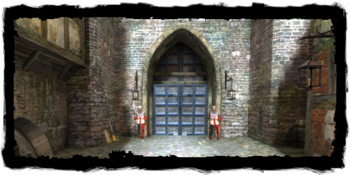 The Roper's Gate is briefly described in the short story "Ο Μάγιστρος". The witcher enters the city of Βίζιμα through that gate and then heads immediately for the nearest tavern, The Old Narakort before eventually stopping at The Fox. It is one of the northern gates into Βίζιμα and from it's brief description it is likely part of a more working or lower district.

In the game, Βίζιμα is described as having quite a few gates — interior and exterior — but none of them is named the "Roper's Gate". There is a gate shown on the game map of Vizima which is not named and it is the most northerly exterior gate. That could well be it.