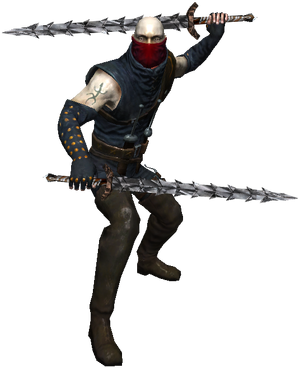 The Salamandra are a criminal organization within the storyline of The Witcher (παιχνίδι για υπολογιστή) and which is led by a Μάγους named Azar Javed.

Members of this mysterious organization wear a symbol depicting a salamander, the fire lizard, usually tattooed on their head, but sometimes elsewhere. The origin of this group is unknown, though one can find ordinary lackeys, trained assassins as well as mages among their ranks. A large contingent of Salamanders attacked Kaer Morhen, the Witchers' Eyre, and stole the secrets of the mutagenic substances and stimulants, so closely guarded by the brotherhood for hundreds of years.

As the game progresses, Γκέραλτ will discover more and more about Salamandra: its whereabouts, its way of generating money and modus operandi. Hunting down the Salamandra organization and finding its leader is the driving motivation of the whole game.

The Salamandra come in many flavours:

And can be found in a variety of places:

One kind of loot item which can be found on the remains of the Salamandra is their badges (also called brooches). They also tend to carry Illegal swords.

In Chapter II, Γκέραλτ must speak to a mysterious man called "the messenger" who can be found at The Hairy Bear as part of the Wanted quest. He has to find out who the messenger works for so that he can sell the badges and get more information. I feel a Διαγωνισμός ποτού coming on...