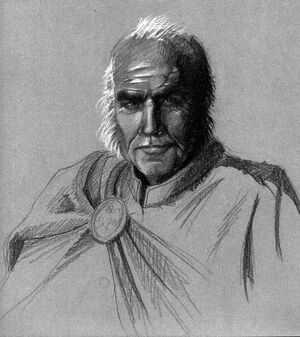 Sigismund Dijkstra is the head of Redanian Intelligence, or secret service. He is a physically imposing man; nearly seven feet tall and bald, with a rather noticeable stomach and is said to give the impression of a scrubbed pig. He also doesn't dress the least bit like a spy, preferring bright colours and flamboyant dress. He is an exceptionally clever man and is said to be very influential in Redania. There is a considerable description of Dijkstra in the novel Blood of Elves where he is first introduced into the saga.

During the Second Nilfgaard War, King Vizimir of Redania was assassinated. During the interregnum, the country was ruled by a Regency Council headed by Dijkstra and Philippa Eilhart. This made him basically the most powerful man in the kingdom.

His personal assistant is Ori Reuven, who was known for his sniffing. His lover is Marie, the wife of the Redanian Minister of Finance.

In the aftermath of the Treaty of Cintra, Dijkstra tells Philippa Eilhart that he is hot on the trail of the conspirators that killed king Vizimir. When an assassination attempt is made on his own life, he realizes that he may have confided in the wrong person and flees Redania. At the foot of the Elskerdeg Pass, he meets with Isengrim Faoiltiarna and Boreas Mun, both fugitives for their own reasons. The three of them form an unlikely travelling party, heading East, towards Zerrikania or even Haakland, presumably leaving the territories of the Nilfgaard Empire and the Northern Kingdoms for good. To his companions he introduces himself as "Sigi Reuven". 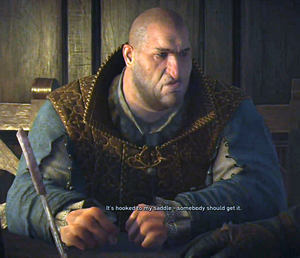 In the The Witcher 3: Wild Hunt, Γκέραλτ meets the spymaster once more in one of Novigradian brotels. Dijkstra has some information about Ciri.