The kingdom of Temeria lies south of the river Pontar. Its neighbors are Redania, Kerack, Kaedwen, Aedirn, Mahakam, Lower Sodden, Brokilon Forest and Cidaris. One of the fiefdoms of Temeria is the dukedom of Ellander and the magical Thanedd Island, with a school for young female adepts of magic located off the shore of the kingdom. Temeria is the strongest (next to Kaedwen) of the Βόρεια Βασίλεια and played a key role in the war against Nilfgaard. Temeria is ruled by King Foltest and its capital is Βίζιμα.

Kings and rulers of Temeria[]

First four coats of arms were designed by our resident heraldry and Witcher expert Mboro, based on the description in the novels. 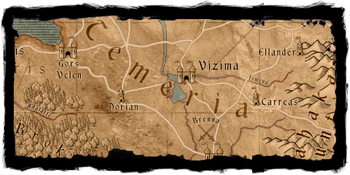 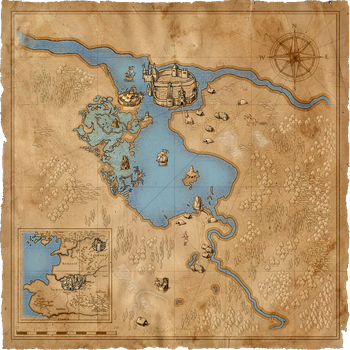 The Πρόλογος is set at Kaer Morhen (which is in Kaedwen, not Temeria), and the following chapters are all set in or around Βίζιμα. You are not free to travel around Temeria as you wish, the available locations change with each Chapter. There is no way to travel large distances to reach other familiar locations in the game world.

Nevertheless, there is a world map in the game, and examining it gives us a sneak peek at locations that might come into play in the future.

At the top of the map is Βίζιμα, with the Προάστια south-east of it, Παλιά Βίζιμα to the south-west, with the Νεκροταφεία Βάλτου and the Βάλτο further to the south. The Παραλίμνιο is just south of the Black Tern Island almost in the south-west corner of the Lake Vizima.

At the bottom left of the map you can see a cut-out which depicts the Βόρεια Βασίλεια. Presumably this means that other Βασίλεια may be visited in a possible sequel.

"Temeria's population is not exclusively human. It also includes dwarves, elves, gnomes and dryads. After the devastating war with Nilfgaard, many areas are haunted by monsters, which have hitherto not constituted a serious threat, while the realm's roads are made unsafe by outlaws and common bandits. As a result, the Μάγιστρος profession is once again in demand, though people continue to treat witchers with caution and disdain, often calling them mutants and freaks.

The Kingdom of Temeria has silver lilies on a black background as its emblem. This powerful country has gained ever more influence in recent years under the wise rule of King Foltest. Across the Pontar River, the kingdom borders Redania. To the south and east it is hemmed in by mountain ranges, including Mahakam, the mainstay of dwarves and gnomes, past which lie the lands of Lyria and Aedrin. The capital of Temeria is Βίζιμα, lying on the shore of Lake Βίζιμα. The second largest city is Maribor. Temeria mints its own coin — the oren. The most widespread religions are the Cult of Melitele and the belief in the Eternal Fire. Temeria is home to the headquarters and many commanderies of the Order of the Flaming Rose."

The term "Lilies" is use as a collective noun, likely meant to be derogatory, referring to the people from Temeria. A common phrase used by non-Temerian NPC enemies in The Witcher 2 is, "Plough the lilies!" The term most likely originates from the silver lilies in Temeria's emblem.