Thaler is the local fence, or is he? It seems he rubs elbows with the rich and powerful as well as the underworld. What is his game?

For all of Chapter II, Thaler can be found in his house, which doubles as his shop, in the south-eastern section of the Συνοικία του Ναού, just around the corner from the dungeon. There he can be called upon to buy and sell a variety of goods. He also plays dice and offers a quiet drinking atmosphere and a free place to stay.

Thaler will buy and sell:

When Γκέραλτ gives Shani the roses, before he sleeps with her and after the party, she is surprised and embarrassed saying she does not usually get gifts from admirers. The witcher is surprised and says so, prompting her to tell him a little story about her dating history; about a "gloomy fellow" who scared any other potential admirers away. It seems she dated Thaler at one point and while on a date, it was revealed that he is actually the head of Temerian Intelligence. He was "unmasked" by one of his own rather inept staff. So... Thaler is not just a fence after all, he is much more. Later, two things come of this piece of information:

During A Posh Reception Thaler admits to the witcher that he is a very highly placed spy. King Foltest himself, in his absence, has entrusted the well-being of the city of Vizima to none other than Thaler. It is Thaler's team that sees to all things required by the royal family, be that security services, intelligence gathering, or hunting catoblepas to satisfy a princess' midnight craving. The fact that he is also a world-class drinker seems to have no effect on his official, and unofficial, duties. Also at this point (in the English audio version) Thaler reveals his "true" accent which is that of an upper class Englishman, rather than the lower class cockney used in his guise as a fence. Subsequently he switches between the two freely. 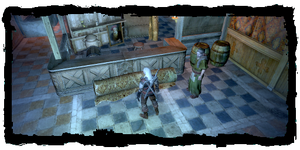 In the Temple Quarter of Vizima lives a fence named Thaler. He has many things that belonged to Berengar, and also deals in illegal goods. The fence is a repulsive man and uses particularly foul language.

During the day he can be found in his store, which is located in a house in the Temple Quarter.

Thaler put Berengar's witcher equipment up for sale. I wonder how he acquired these things.

The fence's circle of influence is really wide. It also includes city guards.

For a fence and a thug Thaler has surprisingly extensive contracts, not only with thieves, but also among the affluent.

There was a lot of circumstantial evidence suggesting that Thaler was working for Salamandra, yet he proved to be innocent.

To my surprise Thaler the fence was invited to Leuvaarden's reception, at which only the rich and influential were present.

It turned out that Thaler is the chief of Temerian intelligence and his fence guise is simply one of many assumed personalities.

When Count de Wett accused Thaler of treason, I did not object. The former head of Temeria's Intelligence Service was summarily executed.

not actually in the game:

I met Thaler again in the chambers of the royal castle. Foltest seems to be satisfied with the doings of his master spy, and Thaler is pleased with our collaboration.