Witcher Wiki
Register
Don't have an account?
Sign In
in: The Witcher Κεφάλαιο II, Αποστολές στο The Witcher
Ελληνικά

Trying to interrogate the Crown Witness being held by the City Guard begins Γκέραλτ's investigation into Salamandra in the Συνοικία του Ναού. This quest is given to the witcher by detective Raymond Maarloeve when the two first meet.

Having successfully conquered the Beast of the sewers. Γκέραλτ emerges from from the cesspool and immediately spies the shingle for the local private eye: the one Siegfried mentioned earlier. He decides to go in and have a chat with the gumshoe.

After a very informative exchange, Γκέραλτ learns that the City Guard has captured one of the men with the Salamander badges and is currently holding him somewhere in the Συνοικία του Ναού. He decides to try to interrogate the witness himself, but that means finding the prisoner first. He heads off to the jail to speak with Vincent or Jethro, who should be able to shed some light on the matter.

The guards, however, prove less than helpful and our hero must find a way to coax the location from one of them. Jethro is the obvious choice, given his "Fisstech". You can find Fisstech on the bodies of bandits, you can buy it from Coleman at the Hairy Bear Inn, and you can even make it yourself by mixing vermilion and quebrith with a strong alcohol. . Γκέραλτ uses this fact to good effect, supplies the jailer with a little treat, and voilà! The prisoner is being held at the hospital. The guards at the hospice also need a little encouragement, not to mention the right lighting. The witcher must go back and "speak" with them later, around midnight, but few orens later, there is a result. Suddenly there is a sound from the prisoner.

All he manages to say is "Aghhh... Καλκσταιν... He...", when a band of Ramsmeat's men barge in and all heck breaks loose. Γκέραλτ springs into action and it does not take long for things to get back to some semblance of order, but the prisoner has lapsed back into unconsciousness, so no further information can be obtained from him.

Interesting events though, it seems Καλκσταιν and Ramsmeat both have a stake in this prisoner. What could be going on?

Vincent avoids all conversation about the prisoner. That won't get me anywhere. Maybe Jethro will be more talkative. I'll press Jethro for more information on the prisoner.

Jethro knows something and wants fisstech in exchange for the information. I have to get some fisstech for Jethro.

Fisstech for Jethro / The New Source[] 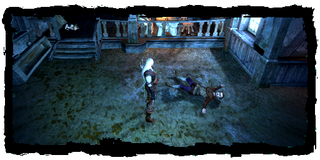 Prisoner in the Hospital[]

In return for fisstech, Jethro told me the guards transported the prisoner to Νοσοκομείο της Αγ. Λεμπιόντα . I might be able to speak with him there. I must speak with the prisoner being held at the hospital. (500 XP)

After questioning the witness we had two promising clues, leading to the alchemist Καλκσταιν and the bandit Ramsmeat. We have two leads: Καλκσταιν and Ramsmeat. (3000 XP)