The Salamander's Tail is a quest which spans the entirety of Chapter I. It begins with Γκέραλτ learning of Salamandra's presence in the outskirts and about the Αιδεσιμότατου from Shani after the opening barghest attack on Alvin and Caroline, and it ends with Γκέραλτ forever leaving the outskirts behind. It is through this quest that Γκέραλτ meets just about everyone he does meet in the outskirts. 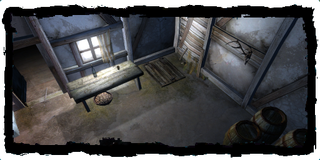 Geralt is hot on the trail of the Salamanders after their daring raid on Kaer Morhen, but he has no idea where to begin his search once he arrives in the outskirts. He must first earn the trust of the Αιδεσιμότατου and the villagers before the Αιδεσιμότατου will impart any of the information he has on Salamandra, so our hero is on a mission to please as he makes his way around the village.

Ultimately, the Αιδεσιμότατου makes good on his promise and reveals the location of the Salamandra hideout in the outskirts. This allows Γκέραλτ to disband at least that one part of the larger organization, rescue Alvin from their clutches and to find Abigail, cornered in a cave by the Αιδεσιμότατου and his followers.

I have discovered that the key to the Salamandra hideout is not technically necessary to enter the hideout. Once its location has been revealed, all Γκέραλτ has to do is to fight the two lackeys guarding the place to gain entry to the hut, but not the trapdoor which leads to the cave. So Γκέραλτ still must go to the Inn first to rescue Shani and get the key to finish this quest.

The leader of the local community, the Αιδεσιμότατου, may have information about the man wearing the Salamander brooch. I must see him as soon as possible. I should speak with the Αιδεσιμότατου about Salamandra.

The Αιδεσιμότατου doesn't trust me because of another witcher who was here earlier. I must tend to the Beast and talk to the village's most prominent inhabitants — Odo, Haren and Mikul. Maybe I can learn something from them. To gain the villagers' trust. I must first convince Haren, Odo and Mikul.

I've gained the trust of the most prominent villagers. The Αιδεσιμότατου won't bow so easily. To convince him, I must finish off the Beast. Before I can tend to Salamandra, I must deal with the Beast once and for all.

The Αιδεσιμότατου revealed the location of the Salamandra hideout. He also claims I'll find the key to their lair at the inn. I must go to the inn.

Thanks to the Αιδεσιμότατου's letter of safe conduct, Mikul let me enter Vizima, but i was arrested. I have entered Vizima. (3000 XP)