The Spellbreaker is a quest in Κεφάλαιο I‎II of The Witcher 2: Assassins of Kings.

This quest starts after you have met Philippa in the dungeon, should you decided to rescue her instead of Triss while on Iorveth's path.

You will meet Iorveth shortly after returning to the sewer, then have to clear the way of monsters. There is a possible glitch at this stage, where a Rotfiend may spawn inside the wall of a corner. You can ascertain this has happened when you remain in combat mode (radar glowing in red) after apparently having killed all the monsters in the room. If that happens, keep throwing bombs or casting upgraded Igni spells at each of the walls until you hear its death scream.

Eventually, you will reach the roof of Philippa's house. In the room next to the living room, there is a table with notes and a diagram on it, you will need those to unlock the chest when you go back upstairs. 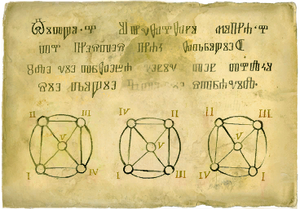 You can copy down the 3 diagrams in the picture. Use one of them (the correct one changes in random order). If the one you chose didn't work, use the next one.

Afterwards you will fight a huge elemental (no reward but 500 XP and the quest related dagger) and the sorceress will flee.

Having to choose between two sorceresses in distress, Geralt decided to first save the one he had close at hand. He was not, however, altruistic. He wanted Philippa to lift the spell controlling Saskia. A dagger capable necessary for that was hidden in lady Eilhart's quarters, and the sorceress - blinded and bound in dimeritium chains - had to cooperate, willing or not.

Iorveth waited in the sewer leading to Philippa's quarters. The elf had trouble with monsters prowling the sewers. The witcher sighed heavily, left the sorceress under Iorveth's watchful eye, and took to what he was best at, that is exterminating monsters.

The Witcher, as witchers tend to do, dealt with the monsters in no time. The way to Philippa's quarters was clear and our hero could escort Iorveth and the sorceress there.

Finally, the three of them arrived at Philippa's quarters. Geralt started to look for the dagger called the Spellbreaker.

The item was hidden in a magically protected chest that could be only opened by activating a runic sign. Candles had to be lit first, in the correct order, as mentioned in Philippa's notes.

The chest has been opened, and our heroes stopped paying attention to anything else for a moment. Philippa, freed from her dimeritium chains, used that chance. She instantly transformed into an owl and fled. Geralt and Iorveth, however, were detained by a magically summoned guardian of the dagger.

But a golem just cannot compare to swashbucklers like the witcher and Iorveth. The monstrosity was defeated, and the artifact recovered, so saving the damsel in distress was now in order. Iorveth, for obvious reasons, was not a presentable person, so he hid in a dark corner, while Geralt went on to the sorcerers' summit.