The Unforgiven is the last quest in Chapter III. It is given to Γκέραλτ by Declan Leuvaarden and sees our hero finally locate the Salamandra's base of operations.

Having completed Lock and Key and All the King's Men for Triss and Leuvaarden, Γκέραλτ goes back to the inn to discuss his next move. Declan tells him that things are actually worse than he anticipated and that it would be a good idea to bring in some backup, either from the Scoia'tael or the Order. Based on his experience with the factions leading up to this point, the witcher makes his decision.

His ally agrees to join him and the witcher then goes to inform Triss that backup has been secured. She says that she will set up the meeting at The New Narakort but that Γκέραλτ should wrap up any unfinished business first. [She really means it here! Do anything that you still need to in Chapter III, you will not get another chance, the second time you speak with her, the conversation will trigger the final events in this Chapter.]

The sorceress has had the opportunity to examine the magic stone the witcher found at the Salamandra hideout in the restricted area. The last communication "on" it came from somewhere very near by, so on his way to the New Narakort, Γκέραλτ stops by Radovid's hideout and has a little chat with him. [If you forgot to speak to him earlier, this option will not present itself.]

He then continues on his way. Upon entering to the inn, depending on his choice in the Beauty and the Beast quest,

After the set-to and subsequent looting of corpses, Γκέραλτ heads upstairs to the reception room for the rendezvous with Triss, Leuvaarden and his ally who are busily brewing their own grand plan. Unfortunately the meeting is interrupted by Roderick de Wett and some knights of the Order. Since they have no other options, Triss utters the phrase "Alk'h imbagha, harr'a...! Dar'kh ambra der' ha DREAN!" and teleports the witcher and his ally directly to the Salamandra base.

Our hero then finds himself in a cave, the Salamandra base presumably, but alone. Oh well, better than in the middle of a crowded hall full of bad guys, but where is his backup? He looks around and sees some old roots blocking the corridor and decides to break through using a little Aard. He then fights his way through the five or six Salamandra asassins and thugs guarding the place, does a little more "shopping" among the remains, and then continues down the next corridor, hopefully to find Yaevinn (or Siegfried). 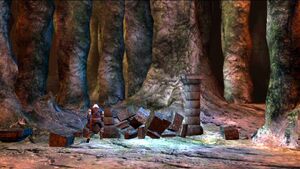 The witcher spies the Professor and Azar Javed at the back of the cave, standing in front of a different portal (more of a round white luminous area). A large group of Salamandra, including two mages stands between him and his targets. He activates the portal and allows the reinforcements to come through. [At first it looks like only three of them come through, but it is obvious later that more of them have arrived so the "reinforcements" are not as laughable as they initially seem].

A battle, of course ensues and once all the Salamandra assailants have been neutralized, Γκέραλτ proceeds to where Azar Javed and the Professor are standing. This initiates a chat with Azar Javed and our hero is subjected to the mad mage's explanation of the "Grand Plan". But enough posturing, he forces the issue and goes to finish off Javed. Just as he winds up to deliver his first blow, he is knocked unconscious by the mage who flees through his own portal exclaiming that he has no counter spells for Alzur's shield. Once again he leaves the Professor behind to deal with the witcher alone. The Professor is no fool and runs away down the corridor towards another cave.

When Γκέραλτ regains consciousness, he finds his allies are on the other side of a magic barrier, so he is forced to go on alone. He follows the only available corridor through what will be the first of several archways (rough-looking wooden support structures) into another cave. There he finds the Professor at the very back of the chamber with a few minions around to help protect him (as if they could!). The witcher fights his way to the scoundrel and they have a touching exchange of views, which ends with a bit more swordplay and the Professor being knocked down.

He tries to crawl away but he is on his back. He asks for mercy and some classic Witcher humour ensues. Apparently the witcher is not in a mood to be showing any mercy. The Professor then makes one last desperate attempt to thwart his nemesis by shooting him with his wrist-mounted mini-crossbow. The witcher then demonstrates the he can indeed parry arrows (or bolts) in flight after all! The Professor then shoots what appears to be some of the stolen witcher equipment from the lab at Kaer Morhen which triggers some sort of explosion and they both to drop down into the cave below, the Kikimore queen's lair.

After picking himself up, Γκέραλτ sees that the Professor is still not dead, and is in fact "holding" the witcher's steel sword for him (he is impaled on it). Just as our hero goes to retrieve his weapon, a Kikimore queen erupts from somewhere further underground and finishes off the Professor in a fairly dramatic manner leaving our hero to deal with the gigantic creature alone.

Rather than embarking on a suicide mission, Γκέραλτ decides to run straight to the other side of the cave when the queen dives underground. She resurfaces, but luckily not before our hero makes it to the other side. He continues through the archway into the corridor, then spins around and immediately casts Aard to collapse the structure. He then sees more smaller kikimora ahead but decides to ignore them. He proceeds, each time he passes an archway he repeating the same process.

The third archway leads to a larger chamber which has a corridor leading out of it. The witcher heads for it hoping to find an exit. On the way he passes one last support post which seems to be carrying an even greater load than the others. He turns around and casts Aard on it, like the previous supports. The entire cave collapses behind him, crushing the Kikimore queen and at the same time revealing an exit.

Γκέραλτ loots the queen's remains. Since she ate the professor, any stuff he was carrying will probably be in her gut. He slices her open and sure enough, there are all the Professor's things. He then makes his way out of the cave and finds himself on the Vizima dike, but not alone.

There, surrounded by crossbowmen and a knight of the Order in full armour, is Adda. She condemns the witcher to immediate execution for knowing about her connection to Salamandra and the attempted coup. But, very luckily for our hero and before this can occur, he is teleported to the Παραλίμνιο — courtesy of Triss who is seen watching the whole thing from wherever she is at the moment.

This concludes this and the All the King's Men quests, updates Berengar's Secret and Witchers' Secrets, and causes to fail any unfinished quests obtained during Γκέραλτ's stay in Vizima, except the Won't Hurt a Bit quest. It also marks the beginning of Chapter IV.

Leuvaarden wants me to find new allies. We can't defeat Salamandra alone. The elves, the Order and the Temerian state are the only potential allies I know of. Leuvaarden doubts I'll be able to convince Velerad, so that leaves the elves led by Yaevinn and the Order with my friend Siegfried. I must convince either Yaevinn and the elves or Siegfried and his friends from the Order to join us.

It seems Siegfried doesn't trust me enough to risk a mission against Salamandra at my side. I should get Siegfried to give me an important task. Maybe that's a way to win his trust.

It seems Yaevinn doesn't trust me enough to help me fight Salamandra. He refuses to risk his unit until he's convinced I'm on their side. I should get Yaevinn to give me an important task. Maybe that's a way to win his trust.

Triss told me we won't be able to defeat Salamandra until she solves the problem with magical anomalies. I guess I should help her. I need to figure out Salamandra, but to do that I must first help Triss identify the nature of the magic anomalies.

Great, Triss wants me to take care of that Alvin kid. I saw this coming. She won't help me with Salamandra until I do something about the boy. I have to finish this Alvin business.

Alvin is all set and Triss should now help me deal with Salamandra. I should speak to her. Alvin is safe. Time to talk to Triss about Salamandra.

I should tend to any unfinished business in Vizima and prepare. When I'm ready, I'll go see Triss. I should prepare and go see Triss.

Depending on your choice in the Beauty and the Beast quest,

Finally, eye to eye with the Professor, the man who helped Azar make off with the witchers' secrets... and Leo's killer. This is the Professor's end... He will pay for his deeds.

I destroyed Salamandra's bases and rooted the organization out of Vizima. I also destroyed the kikimore queen's lair, so those monsters no longer threaten the town. The Professor is dead too, although Azar managed to escape. I managed to destroy Salamandra in Vizima, but Azar escaped. I need to leave the city too. (3500 XP)