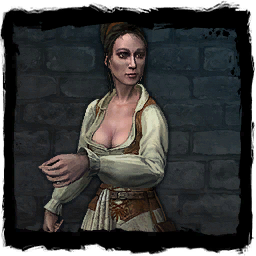 Townsfolk refers to the inhabitants of the Trade Quarter. More affluent than their counterparts in the Συνοικία του Ναού, they have the opportunity to enjoy some of the finer things in life. But for some, not having to work means not having much of anything to do.

This entry is received after retrieving Νταντέλιον's lute, after spending some "time" with Rozalind Pankiera. She has heard that the touch of a witcher "tingles"...

Unmarried townswomen are treated strictly by their parents and largely kept at home. They're a bit bored, but also curious.

You should first speak with Νταντέλιον in The New Narakort inn and take the "Νταντέλιον's Lute" quest from him, before speaking with Rozalind and taking the lute from the trunk in her room or you will miss the "Townsfolk" Journal Entry and Rozalind's sex card!