Triss Merigold of Maribor is a sorceress. She is called the "Fourteenth of the Hill" because she was erroneously thought to have been killed during the Μάχη του Sodden Hill‏‎. She is a friend of Γιενέφερ and Μάγιστρος Γκέραλτ, and unhappily in love with the latter. She took care of Ciri at Kaer Morhen for some time and is like an older sister to her. It was through her intervention that Ciri was not inadvertently given harmful hormones which might have negatively impacted her "womanly assets". She was a member of King Foltest's royal council along with Fercart and Keira Metz, as well as a founding member of the Στοά των Μαγισσών.

She is a skilled healer and carries with her many magical potions, but she never uses them on hersΞωτικό because she is allergic to magic. She is also quite a powerful mage, certainly when it counts most.

Triss is one of the major characters in The Witcher computer game. She is one of the first people Γκέραλτ meets after being found unconscious in the woods by fellow witchers, who are possibly the last witchers anywhere. After dealing with the Salamandra invasion of Kaer Morhen, Triss is gravely wounded and needs a special potion which Γκέραλτ must brew to help her recover. After drinking the potion, she offers Γκέραλτ his first sexual encounter of the game.

She is also the one to nurse Γκέραλτ back health after his first battle with Azar Javed in the Swamp. Once Γκέραλτ regains conciousness, he finds himself in the bedroom of her luxurious Trade Quarter home, and he sees her talking presumably to another sorceress. She diligently "checks him for internal injuries".

Along with me and the other witchers, Triss fought in defense of Kaer Morhen. The sorceress stood against the mysterious mage, one of the leaders of the assault. She was injured and lost consciousness. Ironically, Triss is allergic to magic and she can only be administered natural healing potions.

Triss Merigold is my friend. She saw me die and my return to the world of the living surprised her. Triss is a sorceress — one of the most influential and talented of her kind. She has numerous powerful friends, and she knows the Kaer Morhen witchers. She is one of the few people who know the way to the fortress. I have a feeling Triss likes me a lot.

After Leo's funeral, the sorceress teleported to Vizima. She decided to use her extensive contacts and search for information on Salamandra. Triss promised to find me as soon as I arrive in Vizima.

Triss found me in the swamp, where I lay unconscious after my clash with Azar Javed. She transported me to her house in the Trade Quarter and took care of me until I came round. Lying there awake I overheard Triss gossip with her friend on the magic communicator, and I now know that other sorceresses are also interested in Salamandra.

if Γκέραλτ leaves Alvin with Shani:

I left Alvin in Shani's care. Triss decided that I don't trust her and that I prefer the medic. She is angry with me and it seems our affair is over.

if Γκέραλτ leaves Alvin with Triss:

I concluded that it would be best to leave Alvin in Triss' care. She saw my choice as proof of my trust. She decided I liked her more than Shani, which only improved our relationship.

Νταντέλιον delivered a letter from Triss. The sorceress has asked me to take good care of Alvin. She is also worried about me — she hopes we can have a steady relationship and raise Alvin together when I complete my mission.

I answered Triss' letter and explained my feelings.

After Foltest's return to Vizima, Triss fell into disfavor — the monarch didn't approve of her political scheming. The sorceress is practically a hostage at the Royal Palace and her fate is in my hands.

I met Triss, or rather a vision of her, in the Ice Plains. The sorceress helped me pursue the Grand Master.

Differences from the novels[]

The familiar Triss returns in the second game (Assassins of Kings), and plays a major role throughout the story. She first appears in the prologue as Γκέραλτ's lover; her feelings for him have evidently remained unchanged. Throughout the first act a number of references are made to their relationship, but she is not the only romance option in the game, and as such may or may not remain central to the plot in the latter acts.

Triss is the default romance option in the game, and the game begins with her and Γκέραλτ already in a relationship. The opening scene of Γκέραλτ's story shows him getting up as Triss lies naked beside him as a soldier enters their tent to summon the witcher to the king's side.

The first real opportunity arises near the end of Chapter I during the quest "The Rose of Remembrance". When given the option to go alone to the elven baths or take Triss, Γκέραλτ can choose to take the sorceress along with him. After a battle partway through the quest, the ground under their feet collapses, sending the two plummeting into ancient elven baths. Noting that an immediate escape is impossible, the two can take advantage of their location. Selecting the correct conversation options will initiate a cutscene. 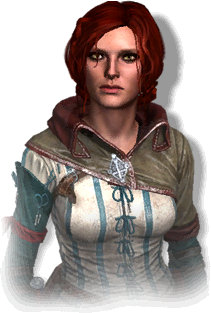 I have known the sorceress Triss Merigold for a long time, for she is one of the Γκέραλτ's closest friends. The young, pretty, talented, auburn-haired mage from Maribor hardly reminded me of the giggling flapper of years past. Her knowledge, abilities and loyalty had brought her far. A hero from Sodden, known as the Fourteenth of the Hill - for she was mistakenly counted as the fourteenth mage to die in that battle - she sat on the royal council of King Foltest of Temeria. And though they say that a monarch's favor is uncertain - for the king had once expelled all mages from Temeria - Triss had managed to gain Foltest's trust. As regards the witcher, everyone who was witness to Triss' friendship with Γκέραλτ, anyone who saw them together, would easily confirm that these two had much in common... And it is common knowledge that an old flame never dies...

For those reasons, after Foltest's death the sorceress decided that she would help the witcher most by staying by his side. Not heeding her threatened position at court, she harnessed all her strength and powers to helping Γκέραλτ, whom she still had feelings to.

I was not there at the time, but I heard tales of the show of power Triss put on at that beach near Flotsam. Though she was weakened and barely conscious, the sorceress managed to sustain a magical barrier and the three survived the Scoia'tael arrows thanks to her.

Nobody was surprised that Triss knew Sile de Tansarville. A more attentive observer would certainly have noticed the chill in their greetings, as well as Triss' evident dislike of her elder colleague.

If Γκέραλτ agrees to forget about chasing the king slayer:

The sorceress' greatest desire was to be the one and only woman in Γκέραλτ's life, and to forget about all the troubles and dangers they had recently experienced. Γκέραλτ agreed to her proposal, but before they could act, Fate showed them how hard it can be to carry out such romantic plans.

If Γκέραλτ decides he must continue chasing the king's slayer:

The sorceress' greatest desire was to be the one and only woman in Γκέραλτ's life, and to forget about all the troubles and dangers they had recently experienced. Γκέραλτ was close to agreeing to her proposal, yet he knew that it would be impossible to lead a quiet life until he could clear his name. His decision saddened Triss, but the sorceress understood.

Triss was kidnapped by Letho. Γκέραλτ and I feared what he might do to her. Believe me, it was eating me alive, making rest impossible.

Searching Sile's quarters and talking to her neighbor brought more questions than answers. It appeared that Triss had known the woman she had talked to, but the fragments of the conversation recounted to us remained mysterious.

Triss had reached Aedirn – there was evidence to prove it. Finding her would prove difficult, however.

If Γκέραλτ chooses Iorveth's path and helps Philippa in order to lift a curse from Saskia instead of rescuing Triss:

In Aedirn, the search for Triss ended with the discovery of a bitter truth - transformed into a nephrite figurine, she had ironically been in the possession of an oblivious Γκέραλτ for a time and he had brought her straight to the Nilfgaardian camp. The Nilfgaardian emissary envisioned a special part for her in Loc Muinne...

If Γκέραλτ chooses Roche's path and rescues Anais La Valette instead of Triss:

The testimony Shilard extracted from Triss was used to accuse the sorcerers. In this way Miss Merigold contributed involuntarily to a witch-hunt greater than any before it.

In the end the sorceress was freed by a witcher, yet it was not Γκέραλτ. Thanks to Letho she escaped unharmed, but I am sure she would be glad to forget the time she spent in Nilfgaardian captivity. Thus were the lovers reunited among the ruins of Loc Muinne after their long parting, and the story of Triss Merigold's kidnapping ended.

If Γκέραλτ rescues Triss instead of Anais La Valette or Philippa:

Yet the witcher foiled this plan, wrestling Triss from Nilfgaardian hands. I described the story's finale in one of my ballads, omitting the carnage Γκέραλτ wrought there, however. For his part, he thinks that my version, with its colorful description of a mounted pursuit of Renuald aep Matsen, a limp sorceress trundled across his saddle, is too pretentious. Witchers...no sense of licentia poetica at all.

Triss had one more part to play, and a significant one at that. Thanks to her, De Tansarville's machinations were publicly revealed. The scene – now known as "Triss Merigold accuses the Lone Witch of Kovir" – passed into history and presently is one of the more common motifs in contemporary painting.