Zdenek is the reigning world champion in fistfighting. He is undefeated. Well... no one has beaten him twice in a row... until Γκέραλτ, that is! He can be found in the southernmost refugee cave in the swamp cemetery. At least he has the decency to keep his fistfights to the privacy of his own chamber in the cave. 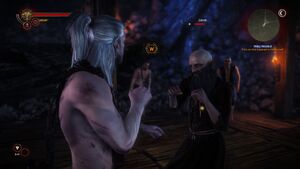 Zdenek in The Witcher 2

Zdenek also makes an appearance in The Witcher 2, though his appearance has changed considerably.