A Potion for Triss

A Potion for Triss is a quest in the Prologue which serves as Geralt's first alchemy lesson.

Triss has been wounded in the attack on Kaer Morhen and, ironically, she can not heal herself as she is allergic to magic, so Geralt must prepare a special potion just for her, but he will need some help. Lambert initially gives him a shopping list of ingredients: high quality alcohol for a base, and Calcium equum. These are upstairs in the keep, but so are some left-over bandits from the raid.

The witcher heads upstairs and, one by one, dispatches the bad guys. He then explores the area and finds a potion of White Gull and the Calcium equum, so he heads back to Lambert to see what there is to do next. Lambert tells him that Vesemir has some other ingredients and information, so it is off to see Vesemir in the dining hall.

Vesemir gives Geralt some celandine and a quick lesson on skinning monsters, then sends him off to collect the claw of the frightener they killed during the assault on the fortress. Now everything seems to be in place but there is an important item missing: the formula. Lambert obliges and gives him the formula for the potion.

Our amnesiac hero then brews the potion, and brings it to Triss. She manages to take the potion and when she has recovered, and since they can not really reminisce about old times, they decide to make some new memories. Cue the soft lights. 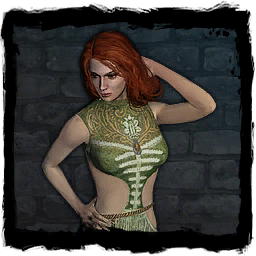 A Potion for Triss[edit | edit source]

Vesemir told me to prepare a potion for Triss, who is wounded. Lambert is watching over the sorceress in the main hall. He'll give me further instructions. I need to see Lambert in the main hall of Kaer Morhen and find out how to brew the potion.

Lambert taught me how to prepare the potion for Triss and advised me to speak to Vesemir. I need to speak with Vesemir.