Adam, and indeed the whole Free Company, took part in the battles at Mayena and Brenna, after which, although he had not yet asked his existing wife for a divorce, he asked for the hand of Pretty Kitty. 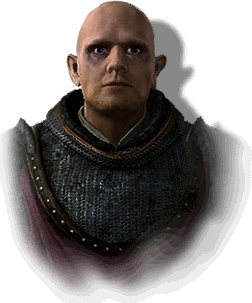 Adam "Adieu" Pangratt is a secondary character in The Witcher 2: Assassins of Kings.

Anyone familiar with military history and the annals of war has probably heard of Adam "Adieu" Pangratt, who was one of the "Sly Cats" – rabble rousers, political prisoners and other convicts whom King Esterad Thyssen freed to aid unofficially the military effort of the Northern Kingdoms during the second war against Nilfgaard. These men formed the core of the Koviri and Povissan mercenary units that streamed south at that time. Adam Pangratt commanded the valorous Free Company during the Battle of Brenna, where the Nilfgaardian offensive was finally broken and the Black Ones were pushed back beyond the Yaruga. They say that Adam later wed another soldier of fortune, one Julia Abatemarco, known also as Pretty Kitty, who also rose to fame at Brenna. Truly, without people like them, the battle would have taken an entirely different course...

At the time of the tale related herein, Adam Pangratt had been hired by, and was directly serving, King Henselt. He owed this engagement, as he had owed many previous ones, to his reputation, and he could expect to profit from it handsomely as his employer paid those who proved their worth very well. Pangratt and his battle-hardened veterans certainly earned their pay. They accepted the order to guard the cursed mist's perimeter with the composure and cold professionalism characteristic of elite soldiers.

If Geralt chooses to kill him during Chapter II: Roche's Path:

Geralt ran into Pangratt once more while sneaking through the underground tunnels to Vergen. Sadly, they met this time as antagonists, and so their short acquaintance ended with the soldier of fortune's death.

If Geralt chooses to side with the mercenaries during Chapter II: Where is Triss Merigold?:

While exploring the ravines, Geralt chanced upon Pangratt and his men fighting a troll. The witcher joined forces with them, and together they brought down the beast. The soldier of fortune was grateful. With no way to return to Henselt's camp, Pangratt easily abandoned his employer, deciding that he and his unit would join the Vergeni forces in the coming conflict.

"Adieu" kept his word. During the battle for the second gate, he proved that his reputation was not at all exaggerated.

If Geralt chooses to side with the she-troll during Chapter II: Where is Triss Merigold?:

While exploring the ravines, Geralt chanced upon Pangratt and his men fighting a troll. Since the monster's death would decidedly not suit the witcher's interests, and Pangratt and his men refused to back down, tempers flared and a fight broke out between them. Yet the soldier of fortune was shrewd enough to recognize the witcher's technical superiority. He surrendered to Geralt, thus becoming the conflict's first prisoner of war.