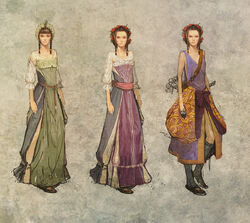 The name Aen Seidhe (Elder Speech meaning "People of the Hills", "Hill Folk") concerns those elves who inhabit the Continent. Although sharing the same ancestry, they are distinct from Aen Elle elves who abandoned the Continent ages ago and moved to another world.

The elves arrived on the Continent on their white ships during the Age of Migration, two thousand years before the arrival of humans.[1] They established several settlements and towns across the current-day Northern Realms and fought some wars with the dwarves.[2]

In the years immediately following the First Landing the elves either tended to ignore humans or tried to start peaceful relationships. One such example being when they took a group of human children to be trained in magic in Loc Muinne. Later, after the massacres carried out by Marshal Milan Raupenneck, they started to leave their settlements hoping that the march of humanity would stop at least – which of course it did not. Eventually Dol Blathanna and certain parts of modern-day Kaedwen became one of the last free habitats of the Aen Seidhe; the elves who did not flee were rounded up and moved to reservations or forced to assimilate.

Around the 1060s elven youth lead by Aelirenn rose up against human rule, despite their elders' warnings. Contrary to their ancestors' advice, these rebels destroyed any palaces and cities they could not defend, in order to prevent them from falling into human hands like dozens elven settlements before. The rebellion was quashed and most of the young elves were killed as the elders had predicted. This drastic reduction in their numbers also lead to threatening the future of the elvenkind.

A few attempts to improve interracial relations were later taken. One of the greatest advocates of the idea of proximity and coexistence was Cregennan of Lod, a mighty human sorcerer. His plans were disrupted by humans who accused him of treason because of his marriage to Lara Dorren, an elven Aen Saevherne. The couple was ambushed near Foam and Cregennan was murdered; Lara managed to escape but died alone after Queen Cerro of Redania refused to help her.

This infuriated the elves and triggered another war which ultimately lead to the conquest of Dol Blathanna by Aedirn. The conflict fostered racial tension that continued through the 13th century.

Another chance for independence came alon in the 1260s when the Nilfgaardian Empire reached Amell and began its invasion on the Northern Realms. Elves throughout the North started to form Scoia'tael commandos together with dwarves and halflings. The Scoia'tael established close cooperation with the imperial military and secret service during the Second Northern War, taking part in a number of operations and massacres against Nordlings. The chaos of war allowed them to retake Dol Blathanna and make it an independent realm with Enid an Gleanna as the ruler. The Vrihedd brigade, a division of the 4th Horse Cavalry consisting solely of elves, was also formed.

In accordance with the arrangements outlined in the Peace of Cintra, Dol Blathanna maintained its autonomy though Enid was forced to swear fealty to King Demavend. Thirty-two Vrihedd officers were handed over to the Nordlings, who were supposed to judge them fairly and grant them amnesty; it is known however that at least some of them were brutally murdered.

Treated unfairly by humans, elven commandos continue to fight, though in smaller and smaller numbers. Some of them joined Saskia in Vergen, believing in her idea of a country without prejudice, tolerant of all nations and races.

Their language is hen llinge and its written form is Elder Runes.