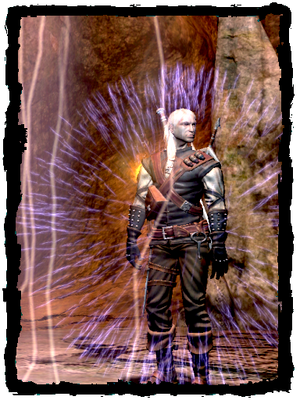 Alzur's shield is one of the many spells invented by the famous mage, Alzur. Alzur was also known for having created many horrible monsters, some of which still roam the world, so possibly this spell was a reaction to one of his nastier creations.

Alzur's shield is a powerful spell which can be cast on an individual to protect them from harm. Triss Merigold casts it on Geralt on at least one occasion during the game, when she teleports the witcher to the Salamandra base in Chapter III. If Geralt chooses her as Alvin's guardian, she also casts this spell on him during his fight with the Grand Master's conjured minions in the Ice Plains.