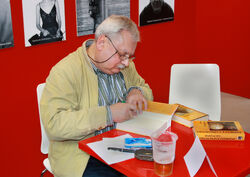 Andrzej Sapkowski at the Book World Fair 2010 in Prague 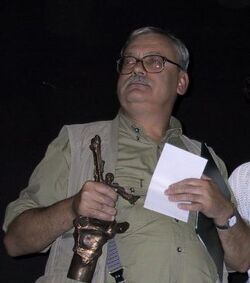 Andrzej Sapkowski (born June 21, 1948 in Łódź) is a Polish fantasy writer. Sapkowski studied economics, and before turning to writing, he had worked as a senior sales representative for a foreign trade company. His first short story, "The Witcher" ("Wiedźmin"), was published in Fantastyka, Poland's leading fantasy literary magazine, in 1986 and was enormously successful both with readers and critics. Sapkowski has created a series of tales based on the world of "The Witcher", comprising three collections of short stories and five novels. This cycle and his many other works have made him one of the best-known fantasy authors in Poland in the 1990s.

The main character of the stories is witcher Geralt, a mutant swordsman who has been trained since childhood to hunt down and destroy monsters. Geralt exists in an ambiguous moral universe, yet manages to maintain his own coherent code of ethics. At the same time cynical and noble, Geralt has been compared to Raymond Chandler's signature character Philip Marlowe. The world in which these adventures take place owes much to J.R.R. Tolkien, while being also heavily influenced by Polish history and Slavic mythology.

In 1997, Sapkowski won the prestigious Polityka Passport award, which is awarded annually to artists who have strong prospects for international success.

In 2001, a television series based on the Witcher series was released in Poland and internationally, entitled The Hexer (Wiedźmin). A film by the same title was compiled from excerpts of the television series but both have been critical and box office failures.

Sapkowski's books have been translated into Czech, Finnish, Estonian, Russian, Lithuanian, German, Italian, Spanish, French and Portuguese. English translation of The Last Wish short story collection was published in the UK by Gollancz in 2007 and in the US by Orbit in 2008.

Polish game publisher CD Projekt released a PC game based on The Witcher universe in October 2007. Called The Witcher, it was very well received and a commercial success. On May 17, 2011 the second game - The Witcher 2: Assassins of Kings was released. In May 2015, the third and final installment of the video game saga - The Witcher 3: Wild Hunt - was released.

Andrzej Sapkowski is a graduate of the University of Lodz, where he studied foreign trade. Subsequently, he worked in that field. Only later did his literary career begin, as a translator, translating the English story "The Words of the Guru" by Cyril M. Kornbluth for Fantastyka magazine. His first work of fiction and literary debut was the short story "The Witcher".

This trilogy is set to finally be translated to English. [1]