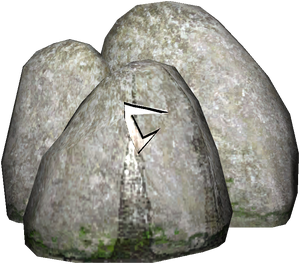 The Axii Sign is a simple magical sign used by witchers. It is a mental wave that triggers a hex that causes an enemy to fight alongside the witcher. The effect can wear off over time or be broken via damage from the casting witcher.

In the game, the Axii sign can be used to lessen the number of hostile creatures or humanoids Geralt is fighting, a way of evening the odds. The witcher's skill with the sign is developed through the allocation of talents. Note that while hexed creatures will fight alongside the witcher, their kills will not grant experience.

Later on, visiting the Circles of Elements attributed to Axii grants Geralt the Blessing of Water.

Circles of Elements dedicated to the Axii sign include: 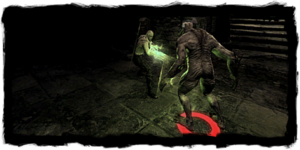 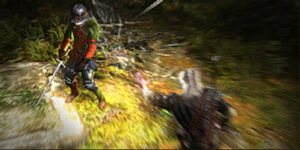 Axii is a charm placed on an opponent. If the charm attempt is successful, the enemy will become your ally for a short while, fighting at your side.

The process of charming an enemy will take several seconds of Geralt channeling the spell (during which he is open to being attacked), however the "target" itself is unable to act during the channeling and given enough time will ultimately submit.

When Enhanced, the Axii Sign increases damage & vitality of charmed enemies by 20/50%, depending on level. Increased levels possibly also increases the duration that enemies stay charmed - this is yet to be confirmed.

With the Fatal attraction upgrade, the sign can charm up to three foes at once.

Axii is of much more use in The Witcher 3. It can be used to calm Roach in particular, but other animals as well. It is also used in several quests for non-lethal alternatives. The base ability charms an opponent's mind, temporarily eliminating him from combat for a period of 5 seconds. There are four other Axii-related abilities which can be enhanced by allocating Ability points via the Character panel:

There are four places of power scattered throughout the game map which enhance the sign.