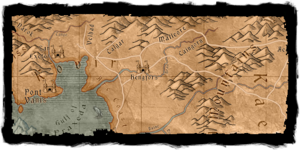 Barefield (Polish: Hołopole, alternately translated as Woefield in The World of the Witcher), is a northern city-state. It's a minor land which is part of the former East March along with Malleore, Creyden and Caingorn. It borders Kaedwen and is walled in by the Kestrel Mountains to the east and the river Braa. There's a temple of Kreve in the center of the city.

The short story "The Bounds of Reason" partly takes place in Barefield. In that story, the area attracted attention when a dragon suddenly appeared and began taking livestock from the local peasant farms. The locals, with the help of a shoemaker named Sheepbagger managed to almost kill the beast by baiting the animal with the carcass of a sheep stuffed with a cocktail sure to kill anything. They were not quite successful, however, and the dragon managed to fly off into the canyons and relative safety.

The coat of arms for Barefield is never actually described in the books. This particular coat of arms was designed by our resident heraldry and Witcher expert Mboro.

The fourth episode of The Hexer TV-series, "Smok" (The Dragon), takes place in Barefield.