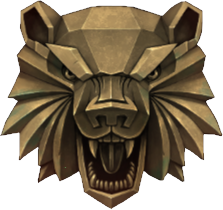 The School of the Bear is one of the three schools introduced in the Witcher 3, and the only one not directly assigned to DLC.

The School of the Bear was one of five known witcher schools. By 1272, it had long disappeared into the annals of history. The witcher Gerd was one of the few known members of the school.

Witchers of the Bear School wore heavier gear: "Ursine" armor. Along with the Cat School, they are the only know witcher schools to use crossbows in their hunt. The school is only mentioned in The Witcher 3: Wild Hunt. Like the Viper School, it has not appeared in any of the books, graphic novels, or other Witcher related media. Along with the school is a whole new set of Witcher gear.