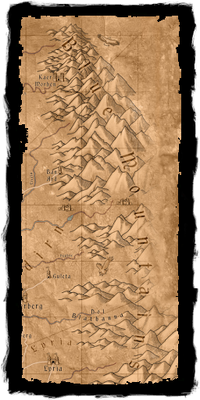 Blue Mountains is a large mountain range dividing the Northern Kingdoms from Haakland and Zerrikania. The mountains form a natural border for at least Lyria, Aedirn and Kaedwen. Dol Blathanna, the Valley of Flowers, lies at the very foot of the mountains, and the river Yaruga's spring is hidden among the rocky heights.

The free elves have made their abode in the mountains; among them is Ida Emean aep Sivney.

In Danusia Stok's translations, this range is called the "Grey Mountains".

“
From the Grey Mountains to Bremervoord, elven commandos rove the forests – this is no longer a small group of guerrilla fighters, this is war.
”
— pg(s). 216, Blood of Elves (UK edition)

“
There is talk of an attack on the free elves of Dol Blathanna and the Grey Mountains.
”
— pg(s). 246, Blood of Elves (UK edition)

Two coexisting translations of original Polish Góry Sine are a result of lack of proper word in English to denote adjective siny. In Slavic languages it denotes pale or blueish grey of bruises, sickly pale skin or rainy sky. Interestingly, this word can be easily translated to Elder Speech – glas, as in Eredin's moniker, means faded blue, green and grey in many Celtic languages. Speculative Elder Speech for "Faded Greyish Blue Mountains" would be then Glas Arda.