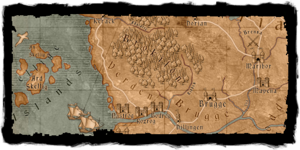 Brokilon (Brokiloén[1] in Elder Speech) is a primeval forest surrounded by the kingdoms of Cintra, Brugge, Sodden and Verden. It is inhabited by dryads, leprechauns and pucks and is very dangerous for humans, as dryads tend to shoot them without warning. They supported the Scoia'tael by allowing them to hide in Brokilon and healing the wounded fighters. The Brokilon dryads are led by Eithné, who lives in Duén Canell, at the centre of the forest.

“
Brokilon Forest, he said, is forbidden territory. The kingdom of forest dryads. Brokilon also defends our flank. The dryads will not let anyone pass. The Nilfgaardians either...
”
— pg(s). 270, Blood of Elves (UK edition)

It is absolutely forbidden to bring fire into the forest; axes and other forms of harming trees are similarly discouraged. Brokilon is home to magical cures known as conynhaela and purple living bone.

Hickory is a common tree in the Brokilon forest.

The dryad in the Druids' grove, Morenn, can tell Geralt about Brokilon.