Witcher Wiki
Register
Don't have an account?
Sign In
in: Principalities, The Price of Neutrality locations
English 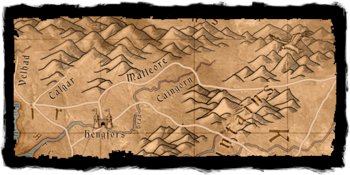 Caingorn is part of the Hengfors League and which lies west of the Kestrel Mountains and has a silver griffin on a red field as its emblem. The Braa forms a natural border with Malleore. The kingdom was part of the East March in Kovir, but is now allied with Creyden and Malleore, forming the League. After the First Treaty of Lan Exeter, Benda of Kaedwen was allowed to use, in official documents, the title of sovereign of Caingorn and Malleore.

In the module, the main character, Deidre Ademeyn hails from Caingorn. She is also the heir(ess) apparent for the recently deceased ruler. Currently, her brother Merwin and the sorceress, Sabrina Glevissig both sit on King Henselt's council which oversees Caingorn.

Caingorn lies west of the Kestrel Mountains and has a silver griffon on a red field as its emblem. The kingdom has allied with Creyden and Malleore, forming the Hengfors League.

The laws of Caingorn allow for female succession. The eldest children, be they men or women, inherit aristocratic titles and estates. Some nobly born younger sons fixate on the laws of neighboring lands and attempt to subvert this principle, but the law is the law and determines the factual state of things.