In the five years during which The Witcher was in production, the game character techniques changed quite a few times. The changes were made in response to the increasing expectations about computer game graphics in general and new ideas for improved character presentation in particular. Initially, each model was made up of barely over one thousand triangles mapped with a single colour map (texture) having a resolution of 512 by 512 pixels. The character models were modular, consisting of a dozen or more volumes. Currently, each character model in The Witcher is a single volume constructed, in many cases, of more than five thousand triangles and enhanced with an entire palette of shaders that utilize four textures with a resolution of 1024 by 1024 pixels each. Thus, as the methods evolved, the work that went into each model increased several fold. CD Projekt wanted to produce the best possible game with the best possible graphics to make The Witcher stand up to scrutiny and competition from other contemporary titles.

The game ultimately includes over one hundred thirty figures, many of which have several texture options. Over two hundred characters populate Vizima and its environs. Men and women of all ages and rank — peasants, townsfolk, and nobility — walk the city's streets. They include craftsmen, traders, wealthy merchants, as well as priests, beggars, and prostitutes. This diversity and multiplicity was required to create a living city where life proceeds as it would in a real city. The figures stroll about, sweep the sidewalks in front of their homes, practice fencing, and even conduct alchemical experiments. All these activities required various animations that were created using motion capture technology. Geralt can interact with any character, so a system of emotional indicators was added to assist with expressions. The system produces the impression that game characters live their own lives reacting to the experiences life throws at them with sadness, delight or anger.

The protagonist, Geralt of Rivia, is the most important character. Geralt had to be absolutely exceptional and polished. In producing the concept drawing, Przemysław "Trust" Truściński underlined the 'dark' side of the witcher's profession, equipping him with the tools of his trade: a trophy hook, a slotted belt for potion vials, and silver-studded gauntlets. "Trust" also made the character "a handsome bandit". With time, the white-haired, scar-faced witcher evolved into a charismatic man who looks at once handsome and ominous. In final form, Geralt is made up of more than ten thousand triangles that enabled him to be presented with all the nuances of the character. 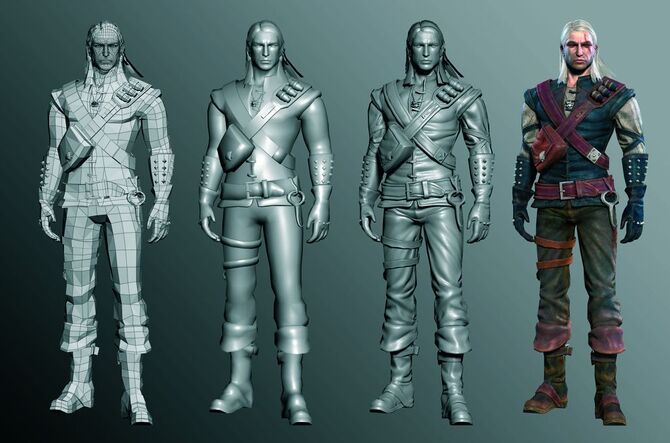 Formation phases of the Geralt model for the computer game.

In a game about a professional monster slayer, the models of the creatures are as important as those of other supporting characters. The creators of these models faced the difficult task of breathing life into beasts proposed by designers. The game includes approximately thirty monster models, though this number grows to seventy if textured versions are included.

The technology for producing monsters differs from that for producing human or humanoid figures. Monsters do not need separate, high poly heads, because they rarely engage in dialogue. However, producing a design and then a model based on a brief written description taken from a book can be challenging. On the other hand, monster design is limited only by technical barriers, so one can let one's imagination run free.

Sapkowski's world lacks monsters typical of the fantasy genre like orcs and goblins. The author himself devised most of this world's creatures, while casting others, deeply rooted in popular culture, in new, highly non-stereotyped roles. Monsters in The Witcher had to be both original and realistic, while befitting the world as portrayed. Fleders that hang like bats from the rafters of abandoned buildings, drowners that lurk just beneath the surface of swamp waters, or noonwraiths that dance in fields when the sun is at its zenith are not only providers of experience points, but pieces that shape this particular fantasy world as a whole.

Inspiration was drawn from animals and especially from insects, amazing for their diversity and exotic anatomy. The frightener, koshchey, and kikimores are based on enlarged photos of arthropods. Elements of animal anatomy can be seen in almost all models, from the fish-like vodyanoi to the snake-like wyvern.