Witcher Wiki
Register
Don't have an account?
Sign In
in: Magic, The Price of Neutrality locations, The Witcher locations
English 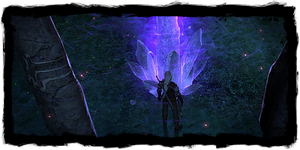 A Circle of Elements (also called an Elemental Circle), and not to be confused with a "Place of Power", is a place where magic is strong, enough for people to have erected monuments. Mages can draw power from Circles of Elements, and witchers can learn new Signs, as well as getting a momentary boost for the spells they already know. These are likely manifestations of "intersections".

Just click on a chapter icon to "zoom down" to the appropriate section of this page.

There are many Circles of Elements scattered around the world of The Witcher. They are indicated by purple dots on the in-game maps.

The circles confer different blessings, based on which element they are associated with: five elements, five blessings:

In the Prologue, there is only one circle of elements, Circle of Whispering Stones, for the sign Aard. It is impossible to miss as the plot necessitates that Geralt find it in order to get out of the laboratory. It can be found at the end of the very dark underground passages leading off the witchers' laboratory.

Chapter I is where Geralt can learn his second sign, Igni. There are only two circles of elements in this Chapter. The Circle of the Windy Wanderer is near the cave entrance, and the Circle of Inner Fire is inside the Crypt.

In Chapter II, Geralt has the opportunity to learn the rest of the signs available to him as a witcher: Axii, Quen and Yrden. There are five circles of elements in Chapter II:

Two more circles of elements are found in Chapter III. The Circle of the Vengeful Flame, in the Elven Ruins part of the sewers and the Circle of Waning Power on the upper level of the Salamandra base.

Note: All the Circles of Elements from Chapter II remain available during Chapter III.

Since Geralt has no access to any of the previously explored locations in Chapter IV, it is lucky that we find a full complement of elemental circles here.

There are only three elemental circles in Chapter V, but at least the most used, Igni, Aard and Quen, are there:

There are no circles of elements at all in the Epilogue as Geralt fights his way through a burning Temple Quarter towards his final epic battle, with the help of a trusted ally. Depending on the Path chosen by our hero, that companion is either Yaevinn (Scoia'tael path), Siegfried (Order path) or Triss (Witcher / neutral path).

In The Price of Neutrality, there are only two circles of elements: one for Aard, south-west of the camp, and one for Igni, south-east of the camp and across the river. They have no other, more interesting names.

"The Price of Neutrality":