Witcher Wiki
Register
Don't have an account?
Sign In
in: The Witcher Chapter I, The Witcher quests
English

Dead Hand of the Past

Dead Hand of the Past is an optional quest in Chapter I given by Declan Leuvaarden. 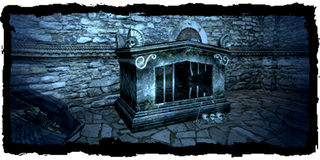 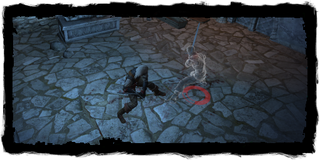 Geralt meets a merchant at the Country Inn called Declan Leuvaarden. Declan's friend has disappeared in a cave beneath the walls of Vizima while trying to avoid the quarantine and bring goods into the city. This person has encountered monsters before, so if he has been killed, it follows that the monsters are not to be taken lightly.

, but failing finding him alive, the orens should cover a "decent burial". When pushed on what a decent burial would entail, Declan intimates that the crypt beneath the Reverend's church would do in a pinch. This is indeed a good thing as it turns out that Declan's friend has fallen prey to echinopsae.

The burial itself is not as easy as one might expect either, as Geralt is confronted by the King of the Wild Hunt in the crypt beneath the Reverend's chapel, just as he is trying to place Leuvaarden's friend's remains in the crumbling sarcophagus. They discuss destiny, catch up on old times and, based on your choices during the conversation, the King either leaves with an ominous promise or he calls forth the spectre of the recently deceased Leo. It appears that Leo holds Geralt responsible for his death and a skirmish ensues.

After the fight, Leo's remains reveal a piece of red meteorite ore, useful in forging a better sword. Geralt could really use a better sword right about now...

The merchant Leuvaarden's companion disappeared in the cave beneath the city walls — a cave supposedly infested with monsters. The merchant asked me to bring his friend back or bury him if he's dead. He promised to pay me 200 orens, no matter the outcome. I have to find Leuvaarden's companion in the cavern beneath the city walls.

The Chapel or Permission or Burial Place[]

I buried Leuvaarden's companion. It's time the merchant paid me. I need to see Leuvaarden and collect my payment. (500 XP)